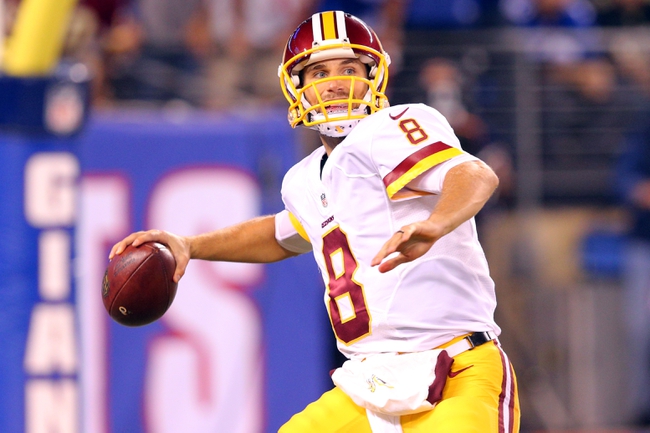 The Philadelphia Eagles and Washington Redskins square off Sunday at FedEx Field.

The Philadelphia Eagles look to get to a .500 record and put together back-to-back wins. Sam Bradford is completing 62.4 percent of his passes for 678 yards, three touchdowns and four interceptions. Bradford has a touchdown pass in 14 straight games. Jordan Matthews and Darren Sproles have combined for 349 receiving yards and one touchdown while Zach Ertz has eight receptions. The Philadelphia Eagles ground game is averaging 64.3 yards per contest, and Ryan Mathews leads the way with 112 yards and one touchdown. Defensively, Philly is allowing 21 points and 359 yards per game. Malcolm Jenkins leads the Eagles with 22 tackles, Connor Barwin has two sacks and Walter Thurmond III has two interceptions. Cody Parkey, Cedric Thornton and DeMarco Murray are questionable.

The Washington Redskins look to get to .500 record with a big conference victory. Kirk Cousins is completing 69.2 percent of his passes for 715 yards, three touchdowns and four interceptions. Cousins has a touchdown pass in eight of his last nine games. Jordan Reed and Pierre Garcon have combined for 402 receiving yards and two touchdowns while Ryan Grant has six receptions. The Washington Redskins ground game is averaging 143.7 yards per contest, and Alfred Morris leads the way with 199 yards on 49 carries. Defensively, Washington is allowing 19.7 points and 277.3 yards per game. Keenan Robinson leads the Redskins with 24 tackles, Jason Hatcher has a sack and Ryan Kerrigan has a pass deflection. DeSean Jackson, Justin Rogers and Perry Riley are questionable.

I'm not 100 percent sold that the Eagles are back on track just because they beat the Jets. However, I'm sold that the Redskins aren't a good football team and continue to struggle to put points on the board. Even with Washington having extra rest, the Eagles are the better team and should win this football game.

Relax Philly, the Eagles are back to being a .500 team.