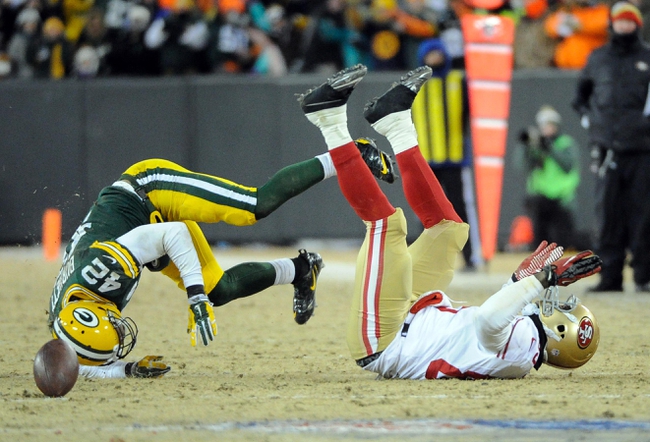 The San Francisco 49ers and the Green Bay Packers face off on Sunday at Levi’s Stadium in a week 4 NFL matchup.

The San Francisco 49ers opened the season with a win on Monday Night but they have lost their next two games and sit at 1-2 for the season. The 49ers offense ranks dead last in scoring at 15 points per game and they are averaging 320 yards per game and are minus four in turnover ratio. 49ers QB Colin Kaepernick is completing 64.8 percent of his passes with two touchdowns and four interceptions and he has rushed for 138 yards. Carlos Hyde leads the San Francisco ground attack with 262 yards and two touchdowns and Anquan Boldin is the Niners top receiver with 12 receptions. The 49ers defense is allowing a 31st ranked 31 points per game and 382.3 yards per game with two interceptions, six sacks, and a fumble recovery. NaVorro Bowman is the 49ers top tackler with 20 tackles, Antoine Bethea has 18 tackles, and Kenneth Acker has 17 tackles. San Francisco needs to stop the bleeding and turn it around in a hurry and they don’t have an easy assignment this week.

The Green Bay Packers are off to a 3-0 start to the season after beating the Chiefs at home on Monday Night Football. The Packers offense is averaging 32 points and 377 yards per game and they are plus three in turnover ratio. Packers QB Aaron Rodgers as completed 73.6 percent of his passes with 10 touchdowns without throwing an interception. Eddie Lacy is Green Bay’s leading rusher with 140 yards and James Starks has 129 yards while Randall Cobb is the top receiver with 20 catches. The Packers defense is allowing 22.7 points and 350.7 yards per game with three interceptions, 11 sacks, and three fumble recoveries. Ha Ha Clinton-Dix is the Pack’s leading tackler with 22, San Shields has 15 tackles, and Nate Palmer has 14 tackles. The Packers have been impressive thus far but their last two games have been at home.

The line for this one is out of hand and doesn’t look right but if it is I love the Niners and the points at home with the Packers coming off of a short week and going on the road. If the spread is incorrect I will update this to reflect the correct line.