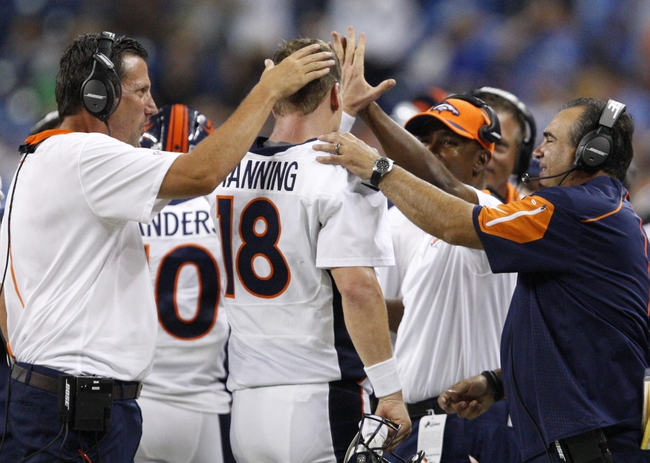 The Minnesota Vikings look to build a three-game winning streak while getting their first road win. Teddy Bridgewater is completing 67.6 percent of his passes for 505 yards, one touchdown and two interceptions. Bridgewater has thrown a touchdown pass in eight of his last 10 games. Mike Wallace and Kyle Rudolph have combined for 247 receiving yards and one touchdown while Jarius Wright has five receptions. The Minnesota Vikings ground game is averaging 144.3 yards per contest, and Adrian Peterson leads the way with 291 yards and two touchdowns. Defensively, Minnesota is allowing 16.7 points and 362.3 yards per game. Harrison Smith leads the Vikings with 23 tackles, Everson Griffen has three sacks and Brian Robison has two pass deflections. Charles Johnson, Justin Trattou and Xavier Rhodes are questionable.

The Denver Broncos look to get off to an impressive 4-0 start to the year. Peyton Manning is completing 63.8 percent of his passes for 755 yards, five touchdowns and three interceptions. Manning has thrown seven interceptions in his last five games. Demaryius Thomas and Emmanuel Sanders have combined for 507 receiving yards and three touchdowns while Jordan Norwood has eight receptions. The Denver Broncos ground game is averaging 57 yards per contest, and Ronnie Hillman leads the way with 88 yards and one touchdown. Defensively, Denver is allowing 16.3 points and 259 yards per game. Brandon Marshall leads the Broncos with 24 tackles, DeMarcus Ware has 3.5 sacks and Aqib Talib has five pass deflections. Juwan Thompson, Kayvon Webster and Kenny Anunike are questionable.

Bridgewater has been slow out of the gate, and a road game against one of the better defenses in the league likely isn't going to get him going. While the Broncos offense has some serious holes and has NO running game at all, Denver is tough to beat in Denver and still has No. 18 leading the way.

I'll take the Denver Broncos to win this game by a touchdown.