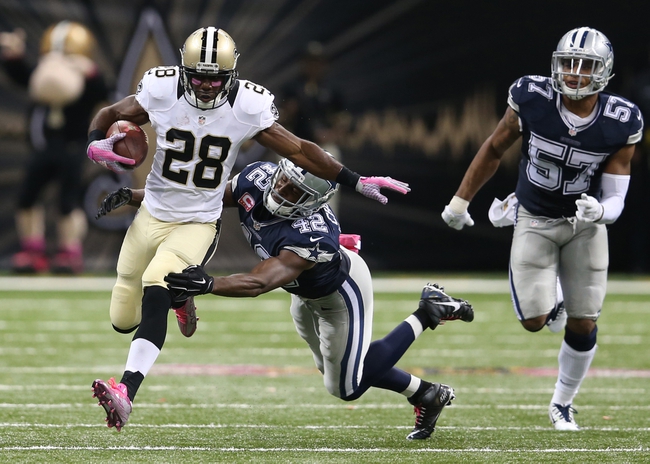 Rounding out the Week 4 Sunday NFL action on “Sunday Night Football,” we had an NFC matchup between the Cowboys and the Saints. Dallas was coming into this one fresh off a loss to the Falcons, while the Saints dropped a game to the Panthers in Week 3. Both teams needed a win, but only New Orleans got it.
Let’s check out a few of the notable stats and players from this game so we can figure out why things played out the way they did. Afterward we’ll check out what’s coming up in Week 5 for both teams.

What Happened: Both teams came into this one struggling, so it figured to be a strange game scoring-wise. Following a 30-yard Dan Bailey field goal in the first quarter, Drew Brees led the Saints to a 3-yard TD pass to Josh Hill which got New Orleans on the board for a 7-3 lead after one.
In the second, Joseph Randle retook the lead for Dallas on a 1-yard TD run. It was the only score of the quarter, and the Cowboys went into the locker room on a 10-7 score.
After the break, the field goal wars began. Zach Hocker’s two kicks book ended one from Dan Bailey, and we were all tied up at 13 after three.
In the fourth, Khiri Robinson got New Orleans back on top with a 1-yard run. Brandon Weeden led the Cowboys down the field on a nice drive to tie it up with a 17-yard pass to Terrance Williams.
Brees got his team in field goal range as regulation expired, but Hocker clanged a short try off the upright and we went to overtime.
On the second play of the extra period, Brees found C.J. Spiller, who scampered 80 yards for the deciding score. It was Brees’ 400th career TD pass, getting the Saints their first win of the year 26-20.

The Stars: We’ll give Brees his due here. He went 33-of-41 for 359 yards and two scores. He’s now one of only five players in NFL history with 400 touchdown passes. Mark Ingram also had a nice game with 77 yards on the ground and 51 off six catches.
On the other side, Bailey was perfect on the night, and Cole Beasley hauled in six grabs for 62 yards.

The Goats: Given Dallas’ current injury situation, we really can’t gripe on what’s essentially a patchwork lineup. That said, the team was only 3-of-12 on third down. They’re also a far cry from the run-dominant team of last season--again, a lot of that is due to injury, however.
As for the Saints, Hocker’s miss could have been huge if the team had lost, but won’t get as much coverage now.

Injuries: The Cowboys were decimated with injuries already, and now they’ve got a few more to worry about. Defensive leader Sean Lee left in the first half, suffering from a concussion. As if that didn’t hurt enough, RB Lance Dunbar sustained a knee injury early in the third quarter.

Outlook: Looking ahead to Week 5, both teams will be back in action on Sunday, October 11. The Saints will travel to Philly to take on the Eagles (1:00 PM ET on FOX), while the Cowboys will host the incoming Patriots (4:25 PM ET on CBS).