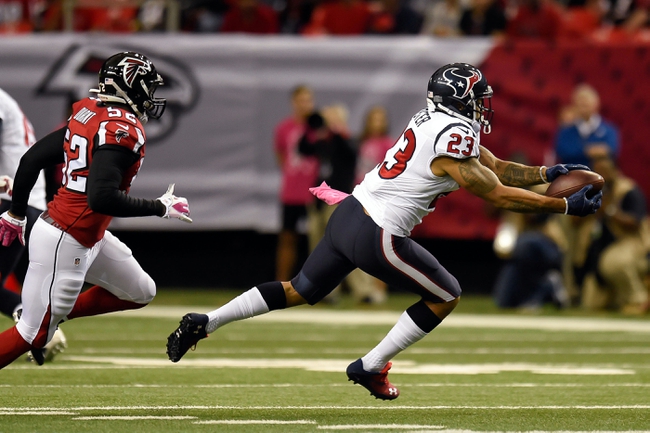 We’ve got one more day to wait before Week 5 gets moving in the NFL. In the meantime, let’s check out some of the headlines out there in our daily wrap-up.

The Texans’ Arian Foster put in another day of limited practice yesterday. The team is still being precautious over his groin; it looks like he’ll be okay for tomorrow’s game.

Similarly, the Colts’ Frank Gore was able to practice yesterday. He’s got a foot issue he’s dealing with but seems to be okay.

While we’re on the subject of the Colts, let’s check out QB Andrew Luck. He’s expecting to start tomorrow’s game against Houston, which is a good sign for Indy fans.
That said, it’s still conceivable that the Colts could opt to rest Luck and save him for Week 6. We’ll likely get a solid update today.

The Seahawks are in trouble at running back right now. Fred Jackson has a high-ankle sprain, which will most likely cost him a bit of time.
We still don’t have any positive confirmation on Marshawn Lynch’s status for Week 5. If he can’t go, Thomas Rawls will be the last man standing.

The Lions got some good news on TE Eric Ebron yesterday. An MRI reportedly showed no structural damage.
We could be looking at a sprain for Ebron, so fans will want to keep tabs on his status this week.

We got a bit of a confirmation on Dallas WR Dez Bryant’s status from team owner Jerry Jones yesterday. He said Bryant could come back to the field in Week 7, after the team’s bye.
We’ll see if that scenario plays out; we probably won’t know anything for sure until after the bye week.

The pick in this article is the opinion of the writer, not a Sports Chat Place site consensus.
Previous Pick
Top Ten Takeaways From Week 4 in the NFL
Next Pick
Top Ten 2015 Week 5 NFL Match-Ups