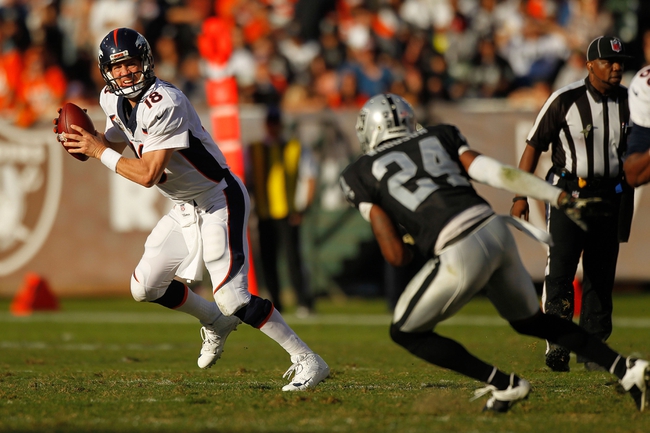 While I’m busy panicking about tonight’s game between the Colts and the Texans, most of the rest of you can start looking ahead to the weekend. As we do every Thursday morning, we’re going to take a look at the top ten match ups of the week. Is anyone else floored that we’re already heading into Week 5?

Woodson has had 62 interceptions over the course of his (likely) Hall of Fame career. One quarterback who has always eluded him? Peyton Manning\. Woodson turned 39 yesterday, so I can’t wait to see if he gets his birthday wish of finally picking-off No. 18 after almost two decades.

Brown is one of the toughest wideouts to defend in the entire game of professional football. But Brandon Flowers, Patrick Robinson, Jason Verrett, and Steve Williams just might be up to the task. So far this season, these four guys have given-up fewer daily fantasy football points to wide receivers than any other group in the NFL. Hope Brown is up for the challenge, Steelers Nation.

As I mentioned yesterday, the Cincinnati Bengals will get a chance to prove themselves this weekend against the Legion of Boom. Dalton has been playing at an elite level, topping 300 passing yards for two weeks running. The LoB, on the other hand, has only faced one truly tough opponent so far this year in Aaron Rodgers. I can’t wait to see who comes out on top in this one.

Y’all know by now how I feel about Watt. But during the Colts’ two annual games against the Texans, you better believe I turn on him. Tonight’s contest could be a rough one for us, Colts fans. Watching an injured #12 trying to elude #99 could get ugly really quickly, but if there’s one thing I’ve learned during the Luck era, it’s to never count him out. This potential shootout will be fun for anyone who doesn’t have a dog in the fight.

I know I already featured this game, but I think it has the potential to be a great contest for the first time in quite awhile. Rookie Cooper is already racking-up veteran statistics on his way to well-over 1,000 yards this season and Talib is itching to stop him. Talib is the best cornerback Cooper has faced thus far as a pro, so I can’t wait to see how he handles the pressure.

I use the term “pass defense” lightly here. This is the team that allowed Brandon Weeden to complete 16 of 26 for 243 yards last week. Great news for Bradford, though, who is coming-off an excellent second-half performance against the Washington Redskins. The veteran should have a chance to continue his Week 4 success as he faces a New Orleans D that has looked dismal against air attacks. If Bradford can’t put together a solid performance in this nearly ideal situation, Philly has big problems.

As utterly confusing as the Rams have been, Quinn and Long are off to incredible starts. Quinn has three sacks in the past four games and Long is on pace for his third season of double-digit sacks. None of this is good for Rodgers, who was sacked three times last week and has been under more pressure than most fans are willing to admit through the first quarter of the season. In order for the Pack to advance to 5-0, their offensive line is going to have to step-up and do something about the Rams’ pass rushers.

As bad of a rap as the 'Skins have been getting for the past couple of years, they’ve allowed only 236 rushing yards, the fewest in the league, so far in 2015. Freeman has been on fire, scoring three rushing touchdowns in consecutive games for the first time since LaDainian Tomlinson did it a decade ago. I’m looking forward to seeing how the young back fares against this intense run D.

With the Baltimore Ravens’ wide receivers dropping like flies, Aiken has been promoted to the No. 1 spot. Aiken has never played as a No. 1 wideout for an entire game in his career, so watching him go against Haden (who was voted the 23rd best player in the league in 2014) will be interesting to say the least. I look for Haden to get the best of him, but Aiken should have increased confidence after last week’s critical touchdown against the Pittsburgh Steelers.

The poor Lions are absolutely falling apart at the seams, but it’s an excellent opportunity for Carson Palmer, Fitzgerald, and the rest of the Arizona Cardinals’ offense to rebound from last week’s tough loss to the Rams. Look for Fitzy (as he’s fondly called in my house) to have a big game. Every time the Lions have faced solid wideouts so far this season, they’ve had themselves a field day.

The pick in this article is the opinion of the writer, not a Sports Chat Place site consensus.
Previous Pick
Power Ranking Best Candidates to Replace Joe Philbin as Dolphins Head Coach
Next Pick
Top Ten Week 5 NFL Picks