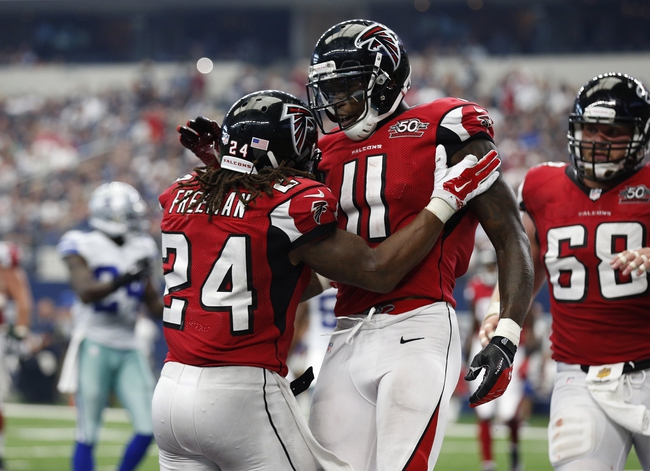 Survivor pools seem easy when you sign up but week in and week out a handful of people go down and while some weeks treat you nicely there are just as many that are disastrous. Last week was one of them. While many favourites did get the win there were plenty of teams in good positions that came up short. Here are this weeks top plays, pool breakers, and pool makers.

The Falcons are a perfect 4-0 to start the season and now expectations are starting to pile up and for good reason as they are a solid football team with a ton of weapons on offense. Julio Jones is quickly asserting himself as the best wide receiver in football, Matt Ryan is among the game's best pivots, and Devonta Freeman has taken the starting running back gig and made it his as he had been lights out for the last three weeks. Atlanta gets the Redskins at home this week and while Washington is 2-2 they beat the Rams and Eagles at home and their losing ways on the road should continue this weekend. With Atlanta's track record at home, their need to keep pace with Carolina, and that offense I don't see any way the Falcons don't score early and often and come away with a comfortable win against Washington.

It should come as no surprise that the Packers are on this list even though they are up against a Rams team who just defeated the Cardinals in Arizona but betting against Aaron Rodgers at Lambeau won't get you anywhere. Todd Gurley exploded against a good Arizona defense last week and he should have no trouble knifing his way through the Packers D but Green Bay's offense at home should have no trouble putting up points the other way and while this one may be close in the end the Pack should be able to get it done. St. Louis has two bad losses this season and while their wins have been against division foes they haven't necessarily played that well outside of the NFC West in recent years and this one should be another in that trend.

Ah, the Patriots. After having their bye week last week we get another monster back in our arsenal and the Patriots are seething at this week's match up with the Cowboys. New England has been a run away freight train this season and going up against a defense that likely won't have Sean Lee we can expect Brady and the gang to go ballistic at Jerry's World. Defensively, New England hasn't had to flex their muscles a whole lot to far and now against a Dallas team without Dez Bryant and Tony Romo and now change of pace back Lance Dunbar – who some thought should have been the team's starter – out for the season this Cowboys team continues top get eaten up. A lot of people have probably used the Pats and Packers so far which is why I have the Falcons atop the list but if you are lucky enough to have New England in your back pocket still this is a great time to pull them out.

The Bears got in the win column last weekend thanks to a last second field goal from Robbie Gould that upended the Oakland Raiders and now they travel to Arrowhead to take on the Kansas City Chiefs. Chicago by all rights is likely to finish near the bottom of the league standings and will be a work in progress for the next couple of seasons as they continue to rebuild but that doesn't mean they don't have some pieces now. Jay Cutler is back and while he is erratic and susceptible to turnovers he is still a good quarterback and against a porous pass defense of Kansas City I think the Bears might be able to keep this one close. Jamaal Charles should have no trouble here and even the KC passing game could get rolling but I just don't like the circumstance here for the Chiefs and while they could very well get a double digit victory here I am staying away from this as a lock and I suggest you do as well.

This is another game I am staying well clear from in survivor and on the spread as these two teams don't know which way is up right now. New Orleans got a much needed victory at home on Sunday night but it came against a very undermanned Dallas Cowboys team in prime time and they needed overtime to do it. The Eagles meanwhile are a mess as they're coming off a loss to the Redskins in DC and have fallen to 1-3 in the NFC East – a division that nobody seems to want to win – and return home in desperation mode. The Eagles to me are the better team on paper and are in Philadelphia this weekend but that hasn't seemed to matter as the Eagles are 0-2 at home this season and haven't really looked good in any facet of the game but especially on the ground. Demarco Murray hasn't been able to get rolling and whether that is on Chip Kelly or not the fact remains the 2014 rushing champ has been a ghost and as such the Eagles are in disarray. The Saints haven't been able to get rolling without Jimmy Graham and while their running game has been a bright spot it is still tough to peg them as well. Stay well away from this mess.

Are we finally ready to pull the trigger on the New York Giants or are they going to disappolnt us again? Sigh. Who knows. But this looks like a good a spot as any to see if New York is finally ready to get back into the limelight and follow up one good performance with another and with the way they played in Buffalo last weekend they should be big time favourites here against the Niners. San Fran is a bus fire right now and may not win a game the rest of the year they way things are going and now they head into New York for Sunday Night Football against a team riddled with confidence? I don't see it getting better here as Manning, Beckham, and the gang should go off.

The pick in this article is the opinion of the writer, not a Sports Chat Place site consensus.
Previous Pick
Top Ten Worst 2015 NFL Week 4 Injuries
Next Pick
Texans vs. Colts - 10/8/15 NFL Pick, Odds, and Prediction