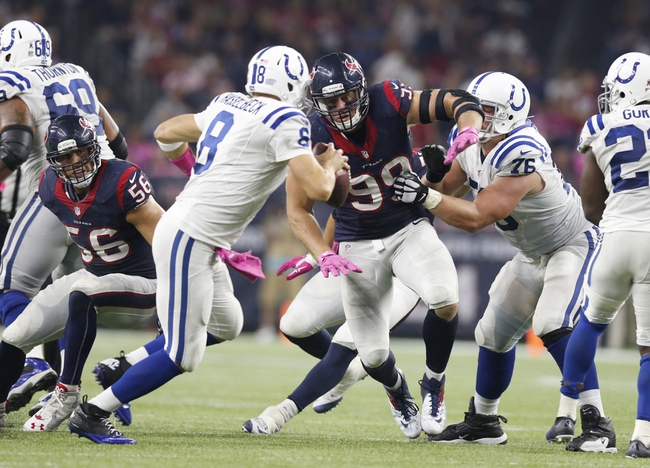 In our Week 5 edition of “Thursday Night Football,” we had a big divisional game from the wide-open AFC South between the Colts and Texans. Indianapolis was coming off a razor-close win against Jacksonville, while Houston was embarrassed by the Falcons in Week 4. This game was pretty bizarre in all honesty, and came with plenty of storylines.
Let’s take a closer look at some of the notable players and stats from this matchup so we can figure out why things played out the way they did. Afterward, we’ll look ahead to Week 6 to see what’s on the schedule for both teams.

What Happened: This was a game for the old guys, as most of the notable stats were posted by veterans. It began with Adam Vinatieri’s 48-yard field goal in the first quarter, and shortly thereafter ex-Texan Andre Johnson snagged a 4-yard TD pass from 40-year-old QB Matt Hasselbeck, who was filling in for Andrew Luck.
In the second, Indy added another field goal from 42 yards out, then Nick Novak got one for Houston from 36 to get them on the board. Brian Hoyer would chuck up a Hail Mary at the end of the half, secured by Jaelen Strong for a 42-yard TD. At the break, it was 13-10 Colts.
In the third, Frank Gore would cap off an impressive Colts drive with a 3-yard TD run. Strong and Hoyer would hook up again from 11 yards out to keep the game close.
Johnson got into the end zone again with a 2-yard diving score from Hasselbeck, which would be the deciding touchdown. Novak would get Houston to within a score on a 49-yarder, but Indy would prevail 27-20 to keep their NFL record division winning streak going.

The Stars: Hasselbeck and Johnson owned the night in Houston, showing that they still had some good stuff left in the tank. Hasselbeck posted 213 yards on 18-of-29 passing with the two scores. Both were to Johnson, who had 77 yards on six grabs. Frank Gore also had a solid night with 22 rushes for 98 yards and a score.
Hoyer was efficient for Houston, going 24-of-31 for 312 yards and two scores. DeAndre Hopkins managed 11 grabs for 169 yards.

The Goats: Penalties, penalties, penalties. The Texans posted 13 fouls for 125 yards, killing drives and sustaining momentum for the Colts.
The team also couldn’t get much of a pass rush (zero sacks) or a running game (63 yards between Arian Foster and Alfred Blue). J.J. Watt was also nowhere to be found.

Injuries: Foster was shaken up in the second quarter and had to be evaluated for a concussion, but not before sneaking back out on the field for a play. He would end up returning after halftime.
Ryan Mallett had his wind knocked out in the second and looked to be okay shortly thereafter, but Hoyer would stay in the game.
Hasselbeck’s performance was all the more impressive considering he’d been in the hospital with a virus on Tuesday night.

Outlook: Looking ahead to Week 6, both teams will be back in action on Sunday, October 18. The Texans will travel to Jacksonville for the Jaguars (1:00 PM ET on CBS), while the Colts get another primetime game at home against the incoming Patriots (8:30 PM ET on NBC).

The pick in this article is the opinion of the writer, not a Sports Chat Place site consensus.
Previous Pick
Power Ranking Best Candidates to Replace Joe Philbin as Dolphins Head Coach
Next Pick
Top Ten Week 5 NFL Picks