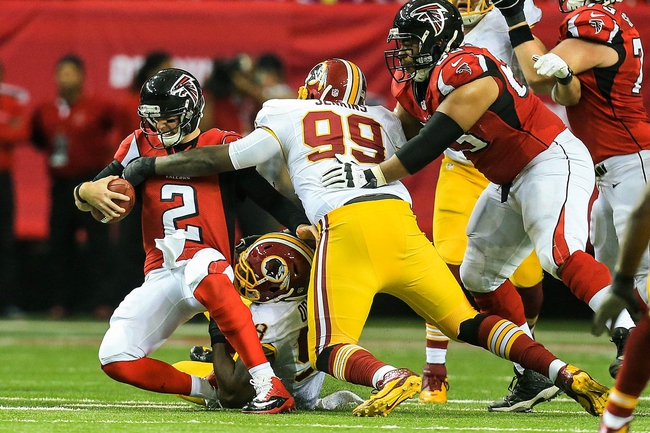 The Atlanta Falcons and the Washington Redskins face off on Sunday at the Georgia Dome in NFL action.

The Atlanta Falcons are off to a 4-0 start but that is only good enough for a tie for first place with the Carolina Panthers. The Falcons offense is averaging 34.2 points and 403.2 yards per game and they are plus six in turnover ratio. Falcons QB Matt Ryan has completed 67.1 percent of his passes with six touchdowns and two interceptions. Devonta Freeman leads the Atlanta ground attack with 252 yards and seven touchdowns and Julio Jones is the top receiver with 38 catches and four touchdowns. The Falcons defense is allowing 23.2 points and 390.5 yards per game with four interceptions, five sacks, and five fumble recoveries. Justin Durant leads the Falcons with 27 tackles, William Moore has 25 tackles, and Paul Worrilow has 24 tackles. The Falcons have traditionally been tough at home.

The Washington Redskins are 2-2 this season and they are coming off of a gutsy win over the Eagles last Sunday. The Redskins offense is averaging 19.5 points and 383 yards per game and they are minus four in turnovers. Washington QB Kirk Cousins is completing 68.6 percent of his passes with four touchdowns and four interceptions. Alfred Morris leads the Redskins in rushing with 261 yards and Jordan Reed and Pierre Garcon each have 24 receptions. The Redskins defense allows 19.8 points and 288 yards per game with nine sacks and three fumble recoveries. Keenan Robinson leads Washington with 27 tackles, Trenton Robinson has 24 tackles, and Chris Baker has 2.5 sacks. The Redskins have looked strong at times and at other times have looked like a team looking for answers.

This looks to be just a few too many points so while I like the Falcons to win the game I like the Redskins to cover the point spread.