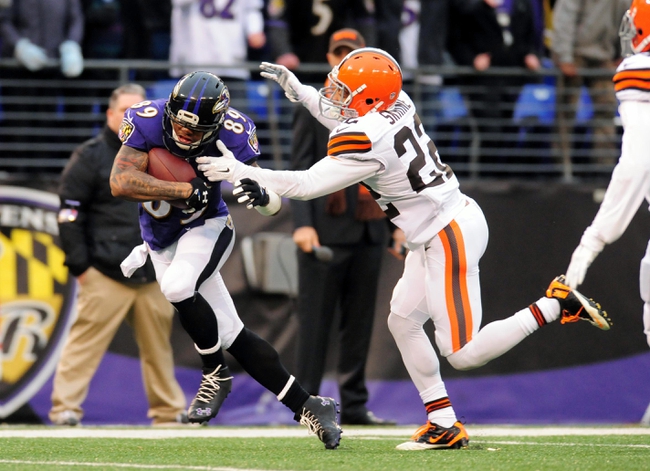 The Baltimore Ravens and the Cleveland Browns face off on Sunday in Baltimore in a NFL matchup of NFC North teams.

The Baltimore Ravens are 1-3 this season and they are coming off of their first win and extra rest after beating the Steelers last Thursday. The Ravens offense is averaging 23.2 points and 355 yards per game and they are minus three in turnover ratio. Baltimore QB Joe Flacco has completed 64.2 percent of his passes with five touchdowns and five interceptions. Justin Forsett leads the Ravens ground attack with 274 yards and 12 receptions and Steve Smith has 29 catches with two touchdowns. The Ravens defense is allowing 26 points and 347 yards per game with three interceptions, 11 sacks, and one fumble recovery. Daryl Smith has 34 tackles to lead the Ravens D, C.J. Mosley has 27 tackles including two sacks, and Brandon Williams has 21 tackles. The Ravens can’t afford too many more losses and taking another loss this early could be devastating.

The Cleveland Browns are 1-3 thus far this season with their lone win coming in week 2 at home against Tennessee. The Browns offense is averaging 21.2 points and 345.5 yards per game and they are minus three in turnovers. Cleveland QB Josh McCown has completed 66.3 percent of his passes with four touchdowns and an interception. Isaiah Crowell is the Browns leading rusher with 191 yards and a touchdown and Travis Benjamin has 16 catches and four touchdowns and Gary Barnridge has 16 catches and two touchdowns. The Browns defense is allowing 25.5 points and a NFL worst 406.2 yards per game with one interception, nine sacks, and five fumble recoveries. Karlos Dansby leads Cleveland with 31 tackles, Donte Whitner has 30 tackles, and Tashaun Gipson has 22 tackles. The Browns are starting to run out of time to turn their season around.

I see the Ravens winning this game but to this point I haven’t been impressed with them so I believe the Browns cover with the points.