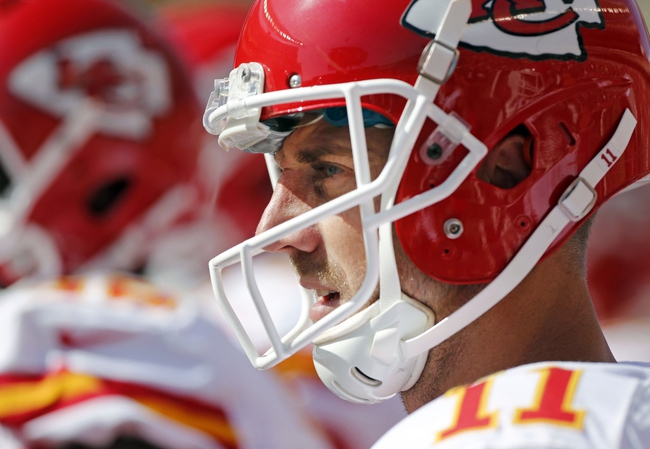 The Chicago Bears look for a big road win to dig out of their early 1-3 hole. Jay Cutler is completing 61.4 percent of his passes for 626 yards, four touchdowns and three interceptions. Cutler has a touchdown pass in nine of his last 10 games. Martellus Bennett and Marquess Wilson have combined for 350 receiving yards and two touchdowns while Eddie Royal has 18 receptions. The Chicago Bears ground game is averaging 123.5 yards per contest, and Matt Forte leads the way with 367 yards and one touchdown. Defensively, Chicago is allowing 31.3 points and 309 yards per game. Shea McClellin leads the Bears with 28 tackles, Pernell McPhee has two sacks and Kyle Fuller has two pass deflections. Alan Ball, Alshon Jeffery and Antrel Rolle are questionable.

The Kansas City Chiefs need a big win to snap a three-game losing streak. Alex Smith is completing 65 percent of his passes for 1,110 yards, four touchdowns and three interceptions. Smith has a touchdown pass in six of his last 10 games. Jeremy Maclin and Travis Kelce have combined for 691 receiving yards and three touchdowns while Chris Conley has three receptions. The Kansas City Chiefs ground game is averaging 108 yards per contest, and Jamaal Charles leads the way with 306 yards and four touchdowns. Defensively, Kansas City is allowing 31.3 points and 397 yards per game. Ron Parker leads the Chiefs with 24 tackles, Justin Houston has three sacks and Marcus Peters has seven pass deflections. Albert Wilson is questionable.

The Chiefs haven't shown enough consistency or scoring punch to beat a team by double digits. The Bears also showed some signs of life last week and has to be feeling good after winning a game in the final seconds.

So, while the Chiefs probably find a way to win this game outright, this is far too many points to lay with a team that's struggling to put points on the board at the moment.