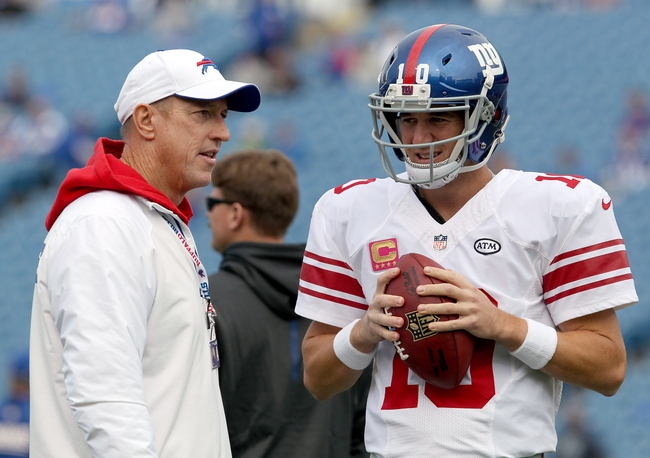 The San Francisco 49ers need a big road victory here to snap a three-game losing streak. Colin Kaepernick is completing 62.1 percent of his passes for 727 yards, two touchdowns and five interceptions. Kaepernick has failed to throw a touchdown pass in five of his last nine games. Torrey Smith and Anquan Boldin have combined for 309 receiving yards and two touchdowns while Garrett Celek has 11 receptions. The San Francisco 49ers ground game is averaging 130.3 yards per contest, and Carlos Hyde leads the way with 282 yards and two touchdowns. Defensively, San Fran is allowing 27.5 points and 377.3 yards per game. NaVorro Bowman leads the 49ers with 28 tackles, Aaron Lynch has three sacks and Tramaine Brock has two pass deflections. Quinton Patton, Vernon Davis and Shareece Wright are questionable.

The New York Giants look for their third straight win to get a game above a .500 record. Eli Manning is completing 62.9 percent of his passes for 976 yards, seven touchdowns and one interception. Manning has two or more touchdown passes in five of his last seven games. Odell Beckham Jr. and Rueben Randle have combined for 482 receiving yards and four touchdowns while Shane Vereen has 12 receptions. The New York Giants ground game is averaging 93 yards per contest, and Rashad Jennings leads the way with 134 yards and one touchdown. Defensively, New York is allowing 20.5 points and 386 yards per game. Uani' Unga leads the Giants with 28 tackles, Prince Amukamara has six pass deflections and Cullen Jenkins has two sacks. Markus Kuhn and Jerome Cunningham are questionable while Victor Cruz is doubtful.

This is an ugly spot for the 49ers. Not only is Kaepernick playing like one of the worst quarterbacks in the league, but the Giants hae found their groove and won back-to-back games. Also, the 49ers have to travel clear across the country, something that rarely works out for the team making the trip.

While I tend to shy away from big chalk in NFL games, this line is spot on. The Giants should win this contest by double digits.

The pick in this article is the opinion of the writer, not a Sports Chat Place site consensus.
Previous Pick
Cowboys vs. Patriots - 10/11/15 NFL Pick, Odds, and Prediction
Next Pick
San Francisco 49ers at New York Giants NFL Score, Recap, News and Notes