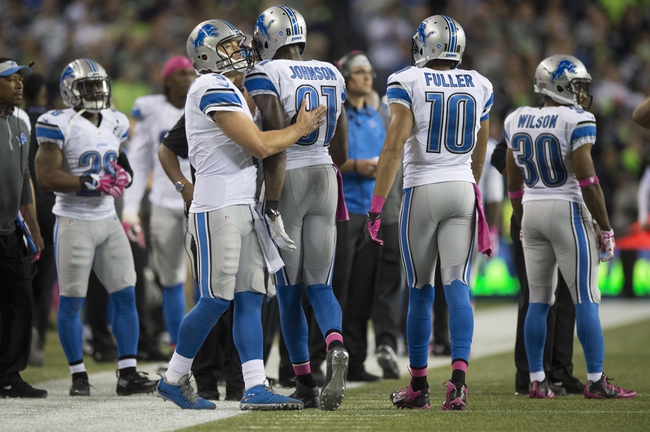 The Arizona Cardinals look to bounce back from an embarrassing home loss to the St. Louis Rams. Carson Palmer is completing 63.4 percent of his passes for 1,155 yards, 10 touchdowns and three interceptions. Palmer has thrown two or more touchdowns in eight of his last 10 games. Larry Fitzgerald and John Brown have combined for 660 receiving yards and six touchdowns while David Johnson has nine receptions. The Arizona Cardinals ground game is averaging 121.8 yards per contest, and Chris Johnson leads the way with 302 yards and two touchdowns. Defensively, Arizona is allowing 18.3 points and 306.8 yards per game. Calais Campbell leads the Cards with 25 tackles, Alex Okafor has two sacks and Tyrann Mathieu has two interceptions. Andre Ellington is questionable.

The Detroit Lions have to win this game to save their season after an 0-4 start. Matthew Stafford is completing 65 percent of his passes for 1,117 yards, five touchdowns and five interceptions. Stafford has a touchdown pass in seven of his last 10 games. Calvin Johnson and Golden Tate have combined for 445 receiving yards and one touchdown while Theo Riddick has 20 receptions. The Detroit Lions ground game is averaging 47 yards per contest, and Ameer Abdullah leads the way with 115 yards and one touchdown. Defensively, Detroit is allowing 24 points and 383 yards per game. Stephen Tulloch leads the Lions with 31 tackles, Ezekiel Ansah has four sacks and Glover Quin has two interceptions. Brandon Pettigrew, Corey Robinson and Eric Ebron are questionable.

The Lions showed me a lot Monday night by nearly stealing a game in Seattle. The Lions have a lot of talent and simply aren't your usual 0-4 team. The Cards were a little shaky last week, and I'm not sure a road game against a desprate Detroit squad is going to fix things. I'm taking the home team and the free field goal, as I think the Lions win this game outright.

The pick in this article is the opinion of the writer, not a Sports Chat Place site consensus.
Previous Pick
St. Louis Rams at Green Bay Packers NFL Score, Recap, News and Notes
Next Pick
Cowboys vs. Patriots - 10/11/15 NFL Pick, Odds, and Prediction