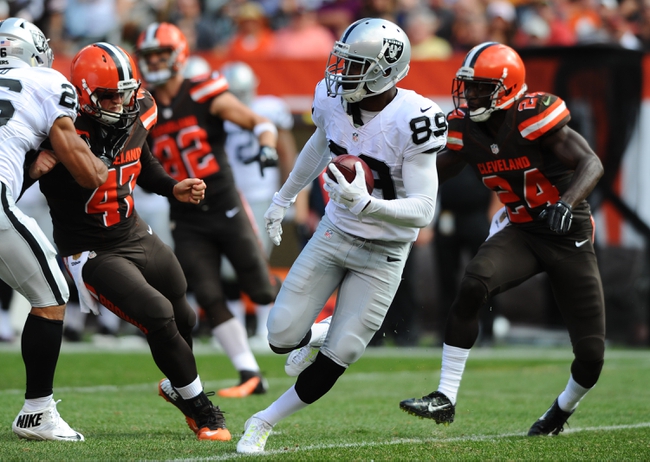 The Oakland Raiders and the Denver Broncos face off on Sunday at O.co Coliseum in an AFC West NFL battle.

The Oakland Raiders are 2-2 this season and they are coming off of a tough loss to the Bears in a game they have the lead until the final play of the game. The Raiders offense is averaging 24.2 points and 351.5 yards and they are plus one in turnover ratio. Oakland QB Derek Carr has completed 62.6 percent of his passes with seven touchdowns and two interceptions. Latavius Murray leads the Raiders ground attack with 297 yards and two touchdowns and Amari Cooper leads in receptions with 24 and Michael Crabtree has 23 grabs. The Raiders defense is allowing 27 points and 403.8 yards per game with three interceptions, eight sacks, and four fumble recoveries. Malcolm Smith leads the Raiders with 37 tackles, Curtis Lofton has 26 tackles, and Charles Woodson has 22 tackles. The Raiders look to be a team on the upturn.

The Denver Broncos are 4-0 to start the season and they have a two game lead in the AFC West. The Broncos offense is averaging 24.2 points and 304 yards per game and they are plus five in turnover ratio. Denver QB Peyton manning has completed 63.6 percent of his passes with six touchdowns and five interceptions. Ronnie Hillman is the Broncos top rusher with 191 yards and two touchdowns and Demaryius Thomas is their leading receiver with 33 catches and a touchdown and Emmanuel Sanders has 25 catches and two touchdowns. The Broncos defense is second best in points allowed per game at 17.2 and they allow a NFL best 275.5 yards with six interceptions, 18 sacks, and seven fumble recoveries. Brandon Marshall leads the Denver defense with 33 tackles, Danny Trevathan has 21 tackles, and DeMarcus Ware has 4.5 sacks. The Broncos have won every which way this season but they all count the same in the standings.

This would be a breakthrough win for the Raiders and I am not saying they don’t have a chance of making it happen but I see them not being able to move on the Broncos defense.