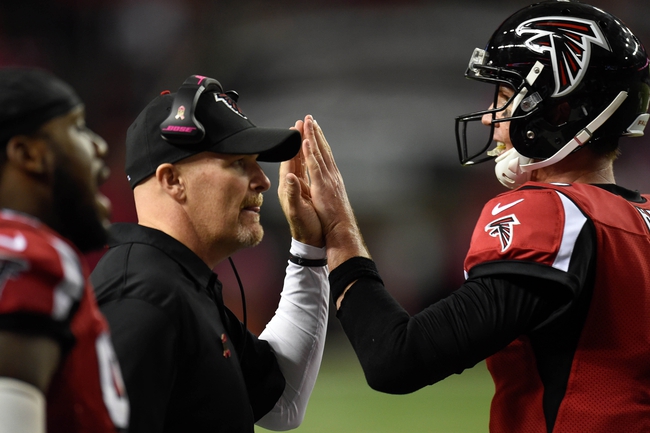 The Washington Redskins and Atlanta Falcons square off Sunday at the Georgia Dome.

The Washington Redskins look for a big road win to get a game above a .500 record. Kirk Cousins is completing 68.6 percent of his passes for 1,005 yards, four touchdowns and four interceptions. Cousins has a touchdown pass in nine of his last 10 games. Jordan Reed and Pierre Garcon have combined for 494 receiving yards and three touchdowns while Jamison Crowder has 15 receptions. The Washington Redskins ground game is averaging 139.5 yards per contest, and Alfred Morris leads the way with 261 yards on 66 carries. Defensively, Washington is allowing 19.8 points and 288 yards per game. Keenan Robinson leads the Redskins with 27 tackles, Chris Baker has 2.5 sacks and Bashaud Breeland has two pass deflections.

The Atlanta Falcons look to keep the ball rolling and remain undefeated. Matt Ryan is completing 67.1 percent of his passes for 1,202 yards, six touchdowns and two interceptions. Ryan has two or more touchdown passes in six of his last 10 games. Julio Jones and Leonard Hankerson have combined for 719 receiving yards and six touchdowns while Jacob Tamme has eight receptions. The Atlanta Falcons ground game is averaging 113.5 yards per contest, and Devonta Freeman leads the way with 252 yards and seven touchdowns. Defensively, Atlanta is allowing 23.3 points and 390.5 yards per game. Justin Durant leads the Falcons with 28 tackles, Vic Beasley Jr. has two sacks and Robert Alford has five pass deflections. Justin Durant, Jacob Tamme and Tevin Coleman are questionable.

Besides a road game against the Giants on short rest, the Redskins haven't played THAT bad. Washington has a defense that's sixth in the NFL in yards allowed and has an offense that has some under-the-radar firepower. Yees, Atlanta should win this game, but the value is with the Redskins and the free touchdown. This game should be tight.