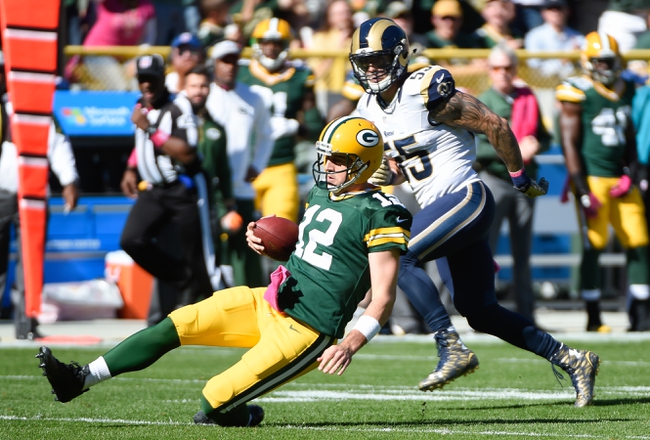 Mixed in with the Week 5 NFL Sunday action, we had a good-looking matchup at Lambeau Field between the Packers and the Rams. Green Bay was coming off a road win over the 49ers, while St. Louis edged their division rival Cardinals in Week 4. It wasn’t necessarily pretty, but the Packers got the job done today.
Let’s check out some of the key stats and players from this game so that we can figure out why things played out the way they did. Afterward, we’ll look ahead to Week 6 to see what’s in store for both teams.

What Happened: The Packers got things started quickly, scoring two touchdowns in the opening quarter. The first came on a 31-yard Aaron Rodgers pass to Ty Montgomery, and the second came on a Quinten Rollins interception that went 45 yards for another TD. After one, it was 14-0 Green Bay.
The Rams struck back in the second with a solid drive, ending on a nifty 5-yard touch pass from Nick Foles to Tayvon Austin. After a second Rodgers interception, Greg Zuerlein posted a 42-yard field goal to cut the lead to 14-10 at the half.
After the break, the Packers struck pay dirt on a beautiful 65-yard TD pass from Rodgers to James Jones, making it 21-10 Green Bay. It would be the only score of the third quarter.
The Packers would make a field goal early in the fourth, but it was called back due to a penalty. Neither offense could get much traction late in the game, but Green Bay managed to post a 35-yard field goal to extend the lead. St. Louis showed some late life with a long pass play that got them down to the goal line, but a Foles interception sealed their fate.
The game would end with a 24-10 Packers victory; they’re now 5-0 on the season while the Rams fall to 2-3.

The Stars: We’ll give James Jones top honors here; he only caught two balls but turned them into 77 yards and a score to lead all receivers. Rodgers had a couple of touchdowns on 19-of-30 passing and led the team in rushing with 39 yards. The Packers defense was also solid, keeping the Rams in check.
On the other side, Todd Gurley put up a monstrous 159 yards on 30 rushes.

The Goats: Foles was just 11-of-30 on the day, amounting to only 141 yards with a TD and four interceptions. The Rams also squandered numerous opportunities to put points on the board.
Green Bay’s offense isn’t quite as dominant as it usually is (and injuries are partly to blame); Rodgers threw a pair of interceptions in this one, which is nearly unheard of for him at home.

The pick in this article is the opinion of the writer, not a Sports Chat Place site consensus.
Previous Pick
Top Ten Week 5 NFL Picks
Next Pick
Lions vs. Cardinals - 10/11/15 NFL Pick, Odds, and Prediction