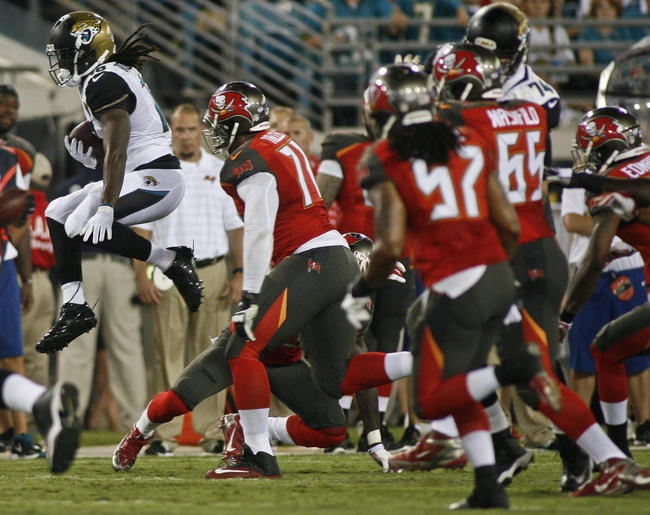 The Tampa Bay Buccaneers and the Jacksonville Jaguars face off on Sunday at Raymond James Stadium in NFL action.

The Tampa Bay Buccaneers are 1-3 this season as they continue the rebuilding process. The Buccaneers offense is averaging 18 points and 333.8 yards per game and they are minus four in turnover ratio. Bucs QB Jameis Winston has completed 54.9 percent of his passes with seven touchdowns and six interceptions. The Tampa Bay rushing attack is led by Doug Martin who has rushed for 282 yards and a touchdown and Vincent Jackson is the top receiver with 19 catches and two touchdowns. The Buccaneers defense is allowing 29.2 points and 322.2 yards per game with two interceptions, nine sacks, and eight fumble recoveries. Kwon Alexander leads the Bucs with 27 tackles, Chris Conte has 25 tackles, and Jacquies Smith has four sacks. The Buccaneers are a work in progress but I haven’t seen a lot from them to make me believe they are turning a corner.

The Jacksonville Jaguars are 1-3 this season and like their opponent are trying to turn their team around. The Jaguars offense is averaging 15.5 points and 346.2 yards per game and they are minus one in turnovers. Jacksonville QB Blake Bortles has completed 54.5 percent of his passes with six touchdowns and three interceptions. T.J. Yeldon leads the Jags ground attack with 259 yards and Allen Hurns is the top receiver with 22 catches and two touchdowns. The Jaguars defense is allowing 26.8 points and 361.5 yards per game with one interception, nine sacks, and four fumble recoveries. Paul Posluszny leads the Jaguars with 39 tackles, Tevin Smith has 38 tackles, and Ryan Davis has 2.5 sacks. The Jaguars are still very much in the AFC South race.

This is a lousy game and with the total set at 42.5 I still like the under. My stronger play is on the winning team against the spread and I will post that in the Premium Area.