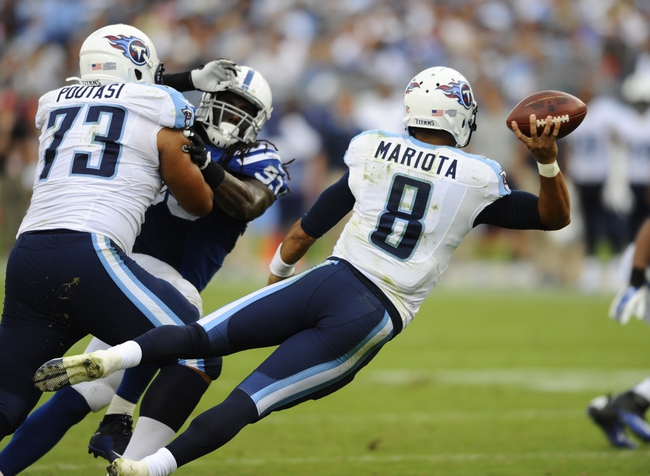 The Tennessee Titans and the Buffalo Bills face off on Sunday in Nashville in a NFL matchup on AFC teams.

The Tennessee Titans are 1-2 this season and they are coming off of a bye last week. The Titans offense is averaging 29.7 points and 375.7 yards per game and they are minus two in turnover ratio. Titans QB Marcus Mariota has completed 62.9 percent of his passes with eight touchdowns and two interceptions in his rookie year. Bishop Sankey is Tennessee’s top rusher with 126 yards and a touchdown and Kendall Wright is the top receiver with 13 catches and two touchdowns. The Titans defense is allowing 25.7 points and 308.3 yards per game with four interceptions, four fumble recoveries, and nine sacks. Zach Brown leads the Titans in tackles with 19, Michael Griffin has 17 tackles, and Derrick Morgan has three sacks. The Titans should be well rested and ready to go.

The Buffalo Bills are 2-2 this season with both of their losses coming at home. The Bills offense is averaging 27.5 points and 358 yards per game and they are plus four in turnover ratio. LeSean McCoy is out indefinitely so the Bills rushing attack is in the hands of Karlos Williams who has rushed for 226 yards and three touchdowns and Charles Clay is the top receiver with 21 catches and two touchdowns and Percy Harvin has 19 catches. The Buffalo defense is allowing 23 points and 376.2 yards per game with six interceptions, three fumble recoveries, and seven sacks. Corey Graham has 36 tackles, Preston Brown has 36 tackles, and Nigel Bradham has 25 tackles. The Bills will look to bounce back from last week’s loss to the Giants that was their worst effort this season.

The Bills have been a their best on the road and with a Rex Ryan defense against a rookie QB I have to give the edge to the Bills.