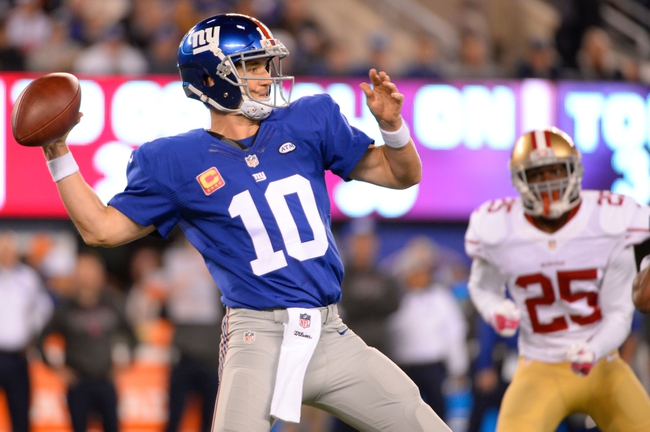 Capping off the Week 5 daily NFL action on “Sunday Night Football,” we had a cross-country NFC matchup between the 49ers and the Giants. San Francisco was coming into this one fresh off a loss to the Packers, while New York bested the Bills in Week 4. The trends continued to hold here, but it ended up being a very close game.
Let’s take a closer look at some of the important players and stats from this one so we can figure out why things played out the way they did. Afterward we’ll look ahead to Week 6 to see what’s in store for both teams.

What Happened: No one was quite sure what to expect here, but the two teams kept it tight most of the way. Phil Dawson got the scoring started on a 43-yard field goal, and Josh Brown answered on a 22-yarder later in the quarter.
In the second, Shane Vereen scored the game’s first touchdown on a 2-yard pass from Eli Manning. Brown would trade field goals again with Dawson, and it was 13-6 at the half.
After the break, Colin Kaepernick found Anquan Boldin for a 3-yard TD. The Giants were able to answer on a 17-yard hookup between Manning and Odell Beckham.
The fourth quarter was pretty intense. Garrett Celek started off the scoring with a 5-yard TD pass from Kaepernick. The Giants could only muster a 24-yard field goal in response, and the Niners were able to take the lead on a 2-yard Carlos Hyde TD run.
The pressure was on, and Manning drove the Giants down the field 82 yards for the game-winning score, a 12-yard pass which Larry Donnell secured over two defenders for the touchdown. That would end it at 30-27 Giants.
New York has now won three straight and sit at 3-2, while the Niners fall to 1-4.

The Stars: Manning became the new Giants QB leader in career wins with this one, and posted a career-best 41-of-54 passing for 441 yards and three touchdowns. Beckham would end up with 121 yards and a touchdown on seven receptions.
On the other side, Carlos Hyde managed 93 yards and a score on 21 carries while Anquan Boldin led the way on eight receptions for 107 yards and the TD.

The Goats: Neither team’s defense could really get a foothold here; there were 52 total first downs in the game by both teams. The San Francisco defense allowed 525 net yards and a 9-of-14 conversion rate on third down. They also put up a goose-egg in the sacks column.

Injuries: We’ve got a few injury notes on both sides from this one. Most notably, Odell Beckham’s hamstring injury, which sidelined him for much of the final drive. The Giants also have issues with LB Jon Beason (concussion) and WR Reuben Randle (hamstring).
The 49ers lost RB Reggie Bush due to a calf injury.

Outlook: Looking ahead to Week 6, the 49ers will be back in action on Sunday, October 19 with a 4:25 PM ET game against the Ravens in San Francisco (CBS).
Meanwhile, the Giants get another primetime game with a divisional matchup against the Eagles in Philly on “Monday Night Football” (October 19; 8:30 PM ET on ESPN)