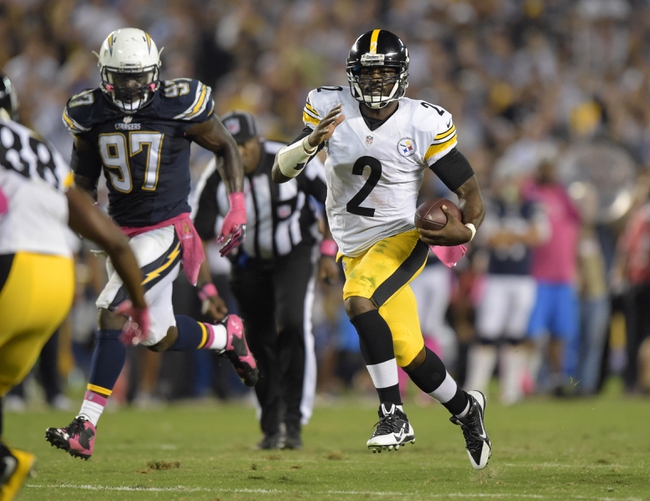 Capping off our Week 5 action in the NFL on “Monday Night Football,” we had a cross-country battle between the Steelers and the Chargers. Pittsburgh was coming off a tough loss to the Ravens, while San Diego edged the Browns in Week 5. This ended up being a pretty exciting game that came down to a gutsy final play.
Let’s check out some of the notable players and stats from this one so we can get an idea why things happened the way they did. Afterward we’ll check out Week 6 and see what’s ahead for both teams.

What Happened: Philip Rivers and the Chargers offense got things going early with a historic 12-yard TD pass to future Hall-of-Famer Antonio Gates. It was his 100th career TD catch, capping off a 5-play, 84-yard drive. It would prove to be the only score of the quarter.
In the second, the Steelers rode Le’Veon Bell to a 9-play, 47-yard drive that resulted in a 47-yard Chris Boswell field goal. Neither team would add to the score and after two it was 7-3 Chargers.
In the third, both teams spun their proverbial wheels offensively. Antwon Blake snagged a 70-yard interception return for a TD and the only score of the quarter. That made it 10-7 Steelers, and then the floodgates opened on the scoreboard.
The fourth quarter featured a comparative barrage of scoring, starting off with a 40-yard field goal from San Diego’s Josh Lambo. The Chargers would add another Antonio Gates touchdown a short time later, this one from 11 yards out.
Pittsburgh would tie it back up on a stellar 72-yard TD pass from Michael Vick to Markus Wheaton, but San Diego would retake the lead on a 54-yard Lambo field goal.
Down by three, the Steelers would mount one final drive that went 80 yards to the goal line. With time running out, they snapped to Bell in the wildcat formation. He’d take it in for the game-winning score and a 24-20 victory.
The Steelers move to 3-2 on the year, while San Diego falls to 2-3.

The Stars: Bell gets top honors here. He’d finish with 21 rushes for 111 yards and 16 more on four grabs. Vick played pretty badly for most of the game, but did have one key 24-yard scramble on the final drive.
Rivers did well on the other side with 365 yards and two scores on 35-of-48 passing. Gates ended up with nine catches for 92 yards and the two scores.

The Goats: San Diego had trouble with the run on both sides of the ball. They’d tally just 52 yards rushing on offense and allowed a total of 155 yards to the Steelers ground game. The Chargers offense was also just 4-of-14 on third downs.
Vick was also pretty sketchy for Pittsburgh through the first three quarters, tossing a few near-miss interception balls.
We had 15 penalties in the game for a total of 140 yards.

Injuries: Chargers LB Manti Te’o tweaked his ankle in the first quarter but was able to return. Steelers safety Will Allen hurt his ankle as well early in the game and would have to come out.

Outlook: Both teams will be back in action for Week 6 on Sunday, October 18. The Steelers will host the incoming Cardinals (1:00 PM ET on FOX), while the Chargers will head to Green Bay to see the Packers (4:25 PM ET on CBS).