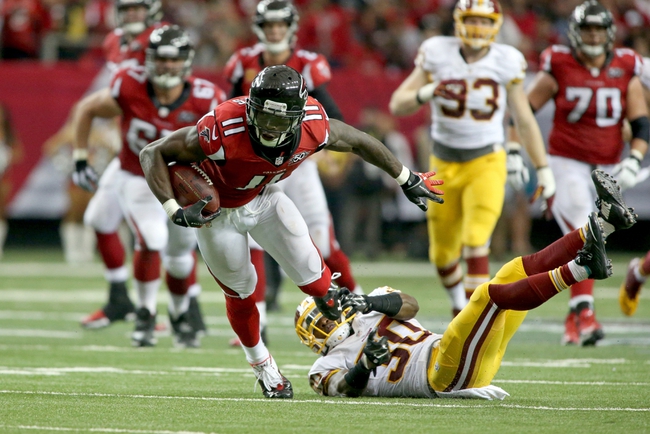 Week 6 in the NFL will be getting started tomorrow, but in the meantime there’s plenty of news to go over. Let’s check out some of the notable headlines out there in our daily wrap-up.

Jamaal Charles’ season officially came to an end yesterday, as the team put him on injured reserve.
Charles will now begin the long process of regaining his health after a torn right ACL, and has around 10 months to get back to 100 percent before training camp. He suffered a similar injury to his left knee in 2011, so he’s familiar with the process.

The Cowboys benched QB Brandon Weeden yesterday, which means Matt Cassel will be getting the start for the team’s next game.
Weeden looked positively overmatched against the Patriots this past week, so the move makes sense. All Cassel has to do is try to keep things together until Tony Romo and Dez Bryant return.

It looks like Julio Jones’ status for tomorrow’s game against the Saints is still up in the air.
Jones is fighting a bad hamstring, and we wouldn’t be surprised at all to see him sit after a short turnaround. He probably won’t even practice today.

The Steelers should be getting WR Martavis Bryant back for the Cardinals game on Sunday. He’s been activated from the reserve/suspended list.
Bryant has been getting over a knee injury, which he re-aggravated last Monday. He brings desperately-needed WR depth to the squad.

Bad news for Bills QB Tyrod Taylor. Word broke yesterday that he could end up missing multiple games, thanks to a sprained MCL.
Taylor apparently was hurt on a tackle in Sunday’s victory. This opens the door for a possible E.J. Manuel start this week.

Sources close to the Redskins believe that TE Jordan Reed will be missing at least a couple more weeks.
Reed is dealing with another concussion; he’s got quite the unsettling history with head injuries.

We didn’t get much new clarification on Alshon Jeffrey’s injured hamstring out of coach John Fox yesterday, which makes us think it’s more serious than the team is letting on.
It’s been a while since Jeffery has played, and it wouldn’t be surprising to see him sit again on Sunday against the Lions. He’ll be a player to watch in practice over the next few days.

The pick in this article is the opinion of the writer, not a Sports Chat Place site consensus.
Previous Pick
Top Ten Takeaways From Week 5 in the NFL
Next Pick
Week 6 NFL Survivor Pool Picks