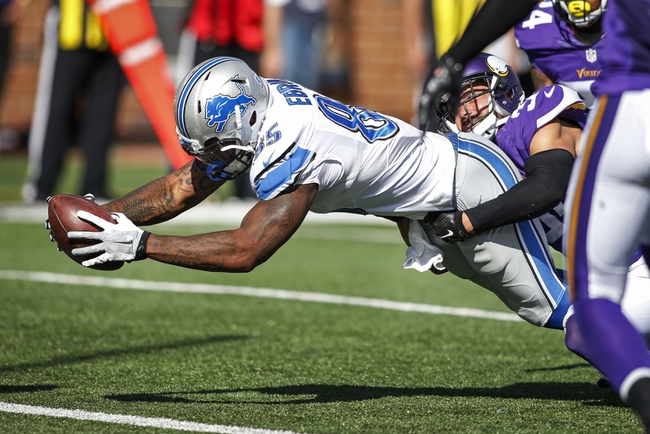 The NFL’s Week 6 will get going this evening when the Falcons and Saints square off in New Orleans. While we’re waiting on that one, let’s check out some of the headlines out there in our daily wrap-up.

Redskins coach Jay Gruden said yesterday that WR DeSean Jackson is “very close” to returning from his hamstring injury.
That could possibly mean a return on Sunday, but we’d imagine a Week 7 return is probably more likely.

The Browns’ Isaiah Crowell put in a limited session of practice yesterday, thanks to a toe injury.
He’ll likely be okay for Week 6 against the Broncos and will have his hands full against their run defense.

Lions TE Eric Ebron is reportedly dealing with a bruised knee and an issue with his MCL, according to sources close to the team.
Ebron was able to get in a limited practice yesterday, however, so he may be able to take the field this weekend.

The Bills’ Sammy Watkins should be able to play between 40-50 snaps this weekend against the Bengals.
Watkins is dealing with a calf injury and won’t be at full strength.

Baltimore lost RB Lorenzo Taliaferro yesterday, placing the backup RB on injured reserve with his foot issue.
Buck Allen will now slide into the No. 2 RB spot behind Justin Forsett.

T.J. Yeldon was not able to practice yesterday. He’s still sidelined with that groin injury sustained in Week 5.
Yeldon is still a question mark for this weekend, despite his insistence that his condition isn’t serious. Jags fans should be hoping he can at least get one practice in today or tomorrow.

The Seahawks’ Pete Carroll said yesterday that RB Marshawn Lynch should be able to play this weekend against the Panthers.
Lynch is on pace to practice in full today and tomorrow and should take the field after sitting out the past two games. We’ll have to wait and see how the team divides up carries.

The pick in this article is the opinion of the writer, not a Sports Chat Place site consensus.
Previous Pick
Top Ten Worst 2015 NFL Week 5 Injuries
Next Pick
Saints vs. Falcons - 10/15/15 NFL Pick, Odds, and Prediction