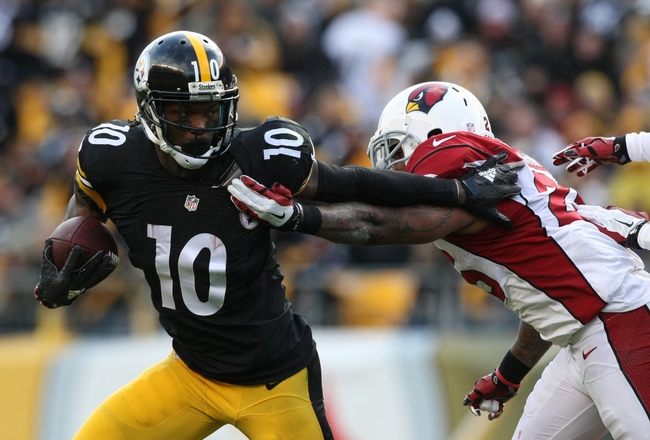 Mixed in with the Week 6 NFL schedule on Sunday, we had an intriguing cross-country AFC-NFC clash featuring the Cardinals and Steelers. Arizona was coming off a 42-17 clobbering of the Lions, while Pittsburgh edged out the Chargers in Week 5 on “Monday Night Football.” Both teams came into this one on the up-swing, but no one gave the Steelers much of a chance.
Let’s check out a few of the key players and stats from the game so we can figure out why things happened the way they did. Afterward we’ll visit Week 7 and see what’s in store for both teams.

What Happened: The Cardinals offense was able to find some early success against the Pittsburgh D, with Carson Palmer hitting Michael Floyd for a 3-yard pass TD. It would be the only score of the first quarter.
Chris Boswell would get the Steelers on the board in the second, nailing a 47-yard field goal, which Chandler Catanzaro answered. At the break, it was 10-7 Steelers.
In the third, Pittsburgh stormed back. Two Boswell field goals would bookend an 8-yard Martavis Bryant TD score from Landry Jones. That gave the Steelers a 15-10 edge.
The fourth quarter was all Steelers as well after another Catanzaro field goal. Boswell would kick his own 38-yarder, then Bryant would ice the game on a stellar 88-yard TD catch-and-run. The 25-14 result puts both teams at 4-2 on the year.
This was another great win for a Roethlisberger-less Steelers team, and another win no one saw coming.

The Stars: Jones gets credit for stepping in and doing what he needed to do. He’d finish 8-of-12 for 168 yards and the two scores. Boswell was also great, going 4-for-4 on field goals. Bryant would end up as the star on offense, with six grabs for 137 yards and two scores.
The Pittsburgh defense gets most of the credit overall, however, forcing three turnovers and nearly bagged a TD on a punt coverage play.

The Goats: The three giveaways were absolute killers for the Cards, and the lack of a running game (56 yards overall) didn’t help either. Arizona was just 1-of-4 in the red zone and had nine penalties for 111 yards.

Injuries: The Steelers have a few new injury concerns moving into Week 7. We’ll have to get an update on Michael Vick’s hamstring injury later this week.
LT Kelvin Beachum’s knee injury also looks pretty serious. He had to be helped off the field early in the game.

The pick in this article is the opinion of the writer, not a Sports Chat Place site consensus.
Previous Pick
NFL Injury Report For Week 6 2015: NFL Impact Injuries
Next Pick
Seattle Seahawks vs. Carolina Panthers - 10/18/15 NFL Pick, Odds, and Prediction