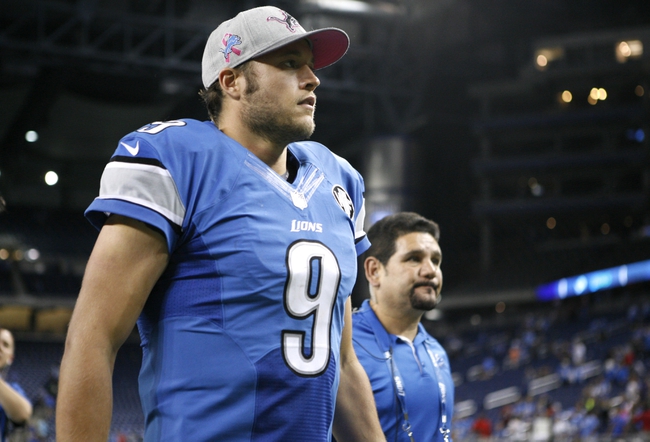 The Chicago Bears look for their third straight victory to get back to a .500 record. Jay Cutler is completing 60.2 percent of his passes for 878 yards, six touchdowns and three interceptions. Cutler has four touchdown passes in his last two games. Marquess Wilson and Martellus Bennett have combined for 467 receiving yards and three touchdowns while Eddie Royal has 18 receptions. The Chicago Bears ground game is averaging 116.2 yards per contest, and Matt Forte leads the way with 438 yards and one touchdown. Defensively, Chicago is allowing 28.4 points and 304.6 yards per game. Shea McClellin leads the Bears with 33 tackles, Pernell McPhee has three sacks and Alan Ball has two pass deflections. Alshon Jeffery, Antrel Rolle and Eddie Royal are questionable.

The Detroit Lions are still looking for their first win of the season after a brutal 0-5 start. Matthew Stafford is completing 64.6 percent of his passes for 1,205 yards, six touchdowns and eight interceptions. Stafford has thrown two or more picks in three of the five games this year. Calvin Johnson and Golden Tate have combined for 586 receiving yards and one touchdown while Theo Riddick has 30 receptions. The Detroit Lions ground game is averaging 49 yards per contest, and Ameer Abdullah leads the way with 132 yards and one touchdown. Defensively, Detroit is allowing 27.6 points and 375.4 yards per game. Stephen Tulloch leads the Lions with 36 tackles, Ezekiel Ansah has five sacks and Glover Quin has two interceptions. Corey Robinson, DeAndre Levy and Haloti Ngata are questionable.

I've been burned by the Lions already this season. Are we really going to lay points with a team that has yet to win a game? The Lions have the skill position players to win games but no offensive line/running game is absolutely killing them. While I fade Jay Cutler as much as possible, I can't lay chalk with a winless Detroit team that is now finding creative ways to lose.

Don't love this game, but if forced to pick, I'm siding with the points as more of a fade from the winless Lions.