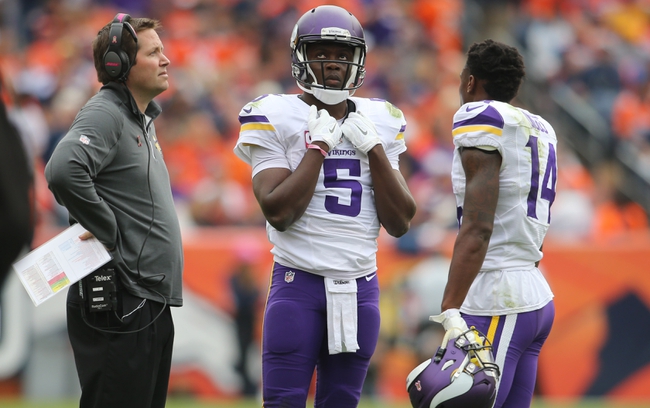 The Kansas City Chiefs need a big road victory after a disappointing 1-4 start to the year. Alex Smith is completing 63 percent of his passes for 1,291 yards, five touchdowns and three interceptions. Smith has a touchdown pass in just two of his last four games. Jeremy Maclin and Travis Kelce have combined for 811 receiving yards and three touchdowns while De'Anthony Thomas has eight receptions. The Kansas City Chiefs ground game is averaging 109.8 yards per carry, and Smith leads the way with 109 yards on 26 carries. Defensively, Kansas City is allowing 28.6 points and 383.2 yards per game. Jaye Howard leads the Chiefs with 29 tackles, Justin Houston has three sacks and Marcus Peters has two interceptions. Albert Wilson and Josh Mauga are questionable.

The Minnesota Vikings are coming off a bye and have a chance to get a game above a .500 record. Teddy Bridgewater is completing 67 percent of his passes for 774 yards, two touchdowns and two interceptions. Bridgewater has a touchdown pass in two of the four games this year. Mike Wallace and Kyle Rudolph have combined for 337 receiving yards and two touchdowns while Stefon Diggs has six receptions. The Minnesota Vikings ground game is averaging 136.5 yards per contest, and Adrian Peterson leads the way with 372 yards and three touchdowns. Defensively, Minnesota is allowing 18.3 points and 357.8 yards per game. Harrison Smith leads the Vikings with 26 tackles, Everson Griffen has three sacks and Xavier Rhodes has three pass deflections. Andrew Sendejo, Charles Johnson and Jabari Price are questionable.

The Vikings have had an extra week to prepare and a Chiefs team that already was struggling on the offensive side of the ball just lost their heart and soul in Charles. The Vikings should roll in a big way at home.