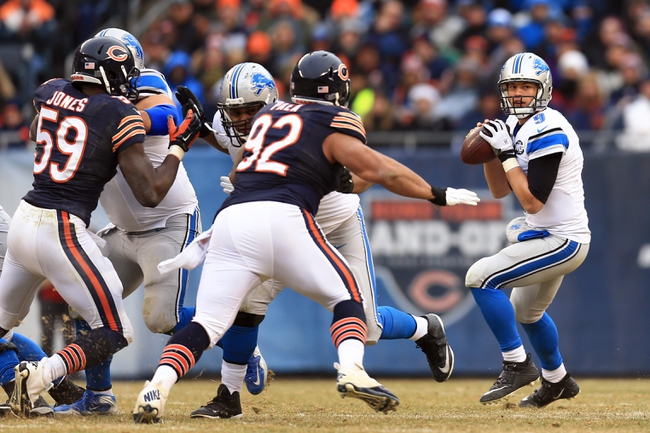 The Detroit Lions and the Chicago Bears face off on Sunday at Ford Field in a NFL battle of NFC North teams.

The Detroit Lions are still winless on the season and they are coming off of a brutal loss at home to the Arizona Cardinals. The Lions offense simply isn’t getting it done scoring a 30th ranked 16.6 points and gaining a 26th ranked 321.4 yards per game and they are minus six in turnover ratio. Matthew Stafford is off to a rough start completing 64.6 percent of his passes with six touchdowns and eight interceptions. The Lions are averaging a NFL worst 49 yards rushing per game but Ameer Abdullah is their top rusher with 132 yards and Calvin Johnson has 32 receptions. The Lions defense is allowing 27.6 points and 375.4 yards per game with three interceptions, 12 sacks, and seven fumble recoveries. Stephen Tulloch leads Detroit with 34 tackles, James Ihedigbo has 34 tackles, and Josh Bynes has 28 tackles. The Lions have had some close losses but they appear to be going in the wrong direction.

The Chicago Bears are 2-3 so far this season after losing their first three games and then winning their last two. The Bears offense is averaging 17.2 points and 316.4 yards per game and they are minus three in turnover ratio. Chicago QB Jay Cutler has completed 60.2 percent of his passes with six touchdowns and three interceptions. Matt Forte leads the Bears rushing attack with 438 yards and a touchdown and he also has 18 catches while Martellus Bennett has 28 receptions with two touchdowns. The Bears defense is allowing 28.4 points and 304.6 yards per game with two interceptions and nine sacks. Shea McClellin leads Chicago with 33 tackles, Christian Jones has 28 tackles, and Pernell McPhee has 26 tackles. The Bears have yet to recover a fumble this season but they should a lot of guts getting wins late the last two weeks.

It’s tough to lay points with a team that has looked as bad the Lions so I won’t and I will go with the Bears.