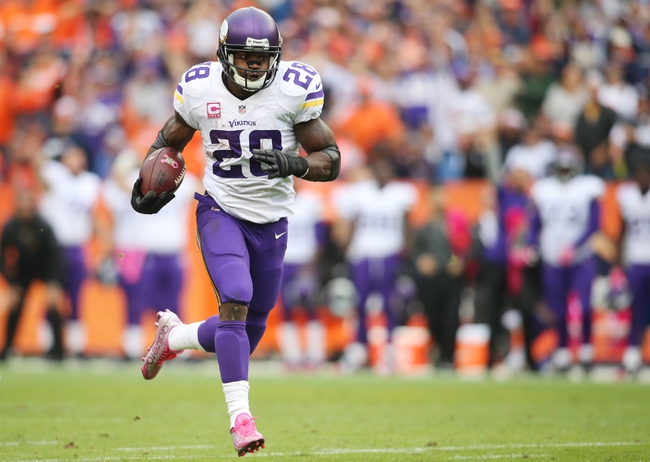 The Minnesota Vikings and the Kansas City Chiefs face off on Sunday at TCF Bank Stadium in a NFL Week 6 matchup.

The Minnesota Vikings are off to a 2-2 start to the season that is good enough for second place in the NFC North. The Vikings offense is averaging 20 points and a 31st ranked 301.8 yards per game and they are plus four in turnover ratio. Vikings QB Teddy Bridgewater has completed 67 percent of his passes with two touchdowns and two interceptions. Adrian Peterson leads the Minnesota ground attack with 372 yards and three touchdowns and Mike Wallace is the top receiver with 20 receptions. The Vikings defense is allowing 18.2 points and 357.8 yards per game with four interceptions, eight sacks, and three fumble recoveries. Anthony Barr and Harrison Smith lead the Vikings with 26 tackles each and Xavier Rhodes has 20 tackles. The Vikings are looking competitive but they will need to improve to be a playoff team.

The Kansas City Chiefs are 1-4 this season after winning their opener and losing the next four games. The Chiefs offense is averaging 23.4 points and 343.6 yards per game with a minus three turnover ratio. KC QB Alex Smith has completed 63 percent of his passes with five touchdowns and three interceptions. Jamaal Charles is out in the Kansas City backfield so it should be a committee and Jeremy Maclin is the top receiver with 36 catches and Travis Kelce has 24 catches. The Chiefs defense is allowing 28.6 points and 383.2 yards per game with two interceptions, 11 sacks, and two fumble recoveries. Jay Howard leads the Chiefs’ defense with 29 tackles and Marcus Peters and Derrick Johnson have 26 tackles each. The Chiefs appear to be a tea looking for answers.

The Chiefs have way too many holes and the Vikings look to be on the way up and I look for this one to play out that way as well so the Vikings win and cover.