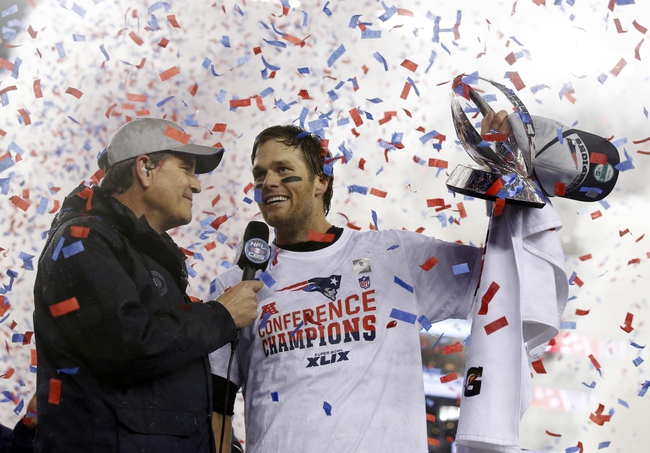 The Patriots get another platform to stick it to the NFL as they head into Indianapolis to battle the Colts for the first time since Deflate Gate.

The New England Patriots find themselves heading into Indy on Sunday night with perhaps a bigger line than expected as they are a double digit road favorite against a team many had pegged going to the Super Bowl repping the AFC this season and people aren't blinking an eye. The Pats head into Lucas Oil in their first game against the Colts since last year's AFC Championship and while the levy on Brady was obviously wiped out and he has been on fire to start the season you can bet he and the Pats offense will be ready and willing to lay a beat down here and continue their season of desctruction on Roger Goodell on the league. Aside from all of the fireworks the Patriots are playing very good football at the moment as they're a perfect 4-0 on the season and face off against a Colts team who despite winning three in a row has looked very suspect in each of those victories.

The Colts are in a tough spot at the moment as they're at a cross roads in their season as on one side they haven't been playuing great football but on the other the rest of their division is awful and they have time to sort it out and will still land as one of the to four seeds in the AFC by virtue of winning the division. Indy broke out a little bit last week thanks to Andre Johnson finally waking up from his five game nap and Frank Gore looked like someone ready to contribute and if they can get the ground game going against Pats and they can keep Brady off the field than Indy has a shot here to keep it close. However, it is never a good idea to bet against Brady in a game where he is out to prove a point and this is the ultimate slap in the face spot for New England thanks to the off season circus surrounding Deflate Gate. In the end, this looks like a spot for the Pats to roll and it should be another struggle for the Colts who fall back to .500.

The pick in this article is the opinion of the writer, not a Sports Chat Place site consensus.
Previous Pick
49ers vs. Ravens - 10/18/15 NFL Pick, Odds, and Prediction
Next Pick
New England Patriots at Indianapolis Colts 10/18/15 NFL Score, Recap, News and Notes