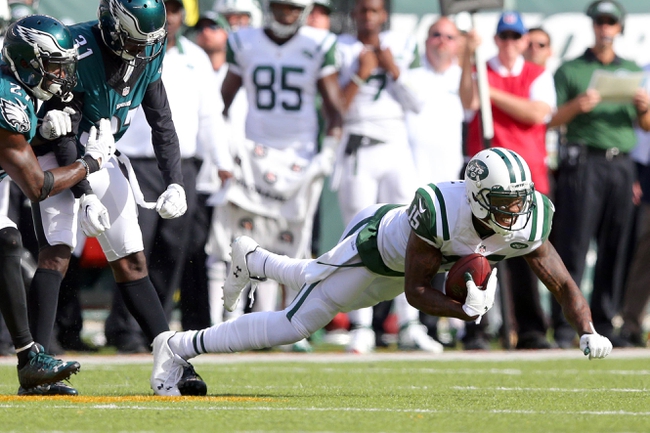 The New York Jets and the Washington Redskins face off on Sunday at MetLife Stadium in Week 6 NFL Football action.

The New York Jets have started the season 3-1 and are coming off of a bye week after beating the Dolphins in week 4 in London. The Jets offense is averaging 23.8 points and 356.2 yards per game and they are plus six in turnover ratio. Ryan Fitzpatrick has been filling in for Geno Smith at QB and he has completed 60.7 percent of his passes with seven touchdowns and six interceptions. Chris Ivory leads the Jets in rushing with 314 yards and three touchdowns and Brandon Marshall is the top receiver with 30 catches and three touchdowns. Defensively the Jets are allowing a NFL best 13.8 points and a second best 280.2 yards per game with six interceptions, seven sacks, and seven fumble recoveries. David Harris leads the Jets with 27 tackles, Demario Davis has 24 tackles, and Calvin Pryor has 23 tackles. The Jets look to be greatly improved over last season.

The Washington Redskins are 2-3 this season after losing last week in overtime to the Falcons. The Redskins offense is averaging 19.4 points and 360.4 yards and they are minus three in turnover ratio. Redskins QB Kirk Cousins has completed 68.1 percent of his passes with five touchdowns and six interceptions. Alfred Morris leads the Redskins rushing game but Matt Jones has made an impact and Pierre Garcon is the top receiver with 27 catches and Jordan Reed has 24. The Redskins defense is allowing a respectable 20.8 points and 314 yards per game with two interceptions, 12 sacks, and six fumble recoveries. Keenan Robinson leads Washington with 31 tackles and Trenton Robinson and Dashon Goldson have 30 tackles. The Redskins are very much a live in the NFC East but they need to turn around the turnovers.

This is probably a close game so the points should factor if they stay this high or if they go higher, it’s just a better bet.