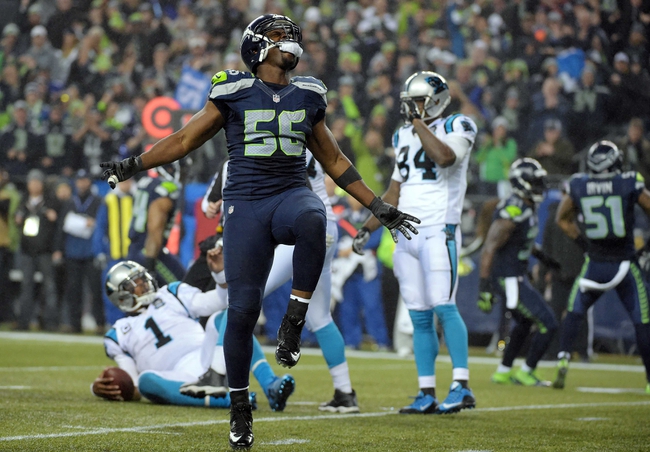 The Seattle Seahawks and the Carolina Panthers face off on Sunday at CenturyLink Field for a week 6 NFL battle of playoff regulars.

The Seattle Seahawks are off to a 2-3 start but last season they started slow as well and ended up in the Super Bowl. The Seahawks offense is averaging 22.2 points and 356 yards per game and they have a net zero turnover ratio. Seattle QB Russell Wilson has completed 70.7 percent of his passes with six touchdowns and three interceptions and he has rushed for 198 yards. Seahawks top running threat Marshawn Lynch is questionable for this one but Thomas Rawls is averaging 5.6 yards per carry and Doug Baldwin is the top receiver with 23 catches and Jimmy Graham has 21. The Seahawks defense is allowing 19.6 points and 306.8 yards per game with one interception, 10 sacks, and six interceptions. Bobby Wagner leads the Seahawks with 41 tackles, K.J. Wright has 33 tackles, and Earl Thomas and Michael Bennett have 21 tackles each. The Seahawks have one of the top rated defenses in the NFL but a brutal schedule has them struggling to get to .500.

The Carolina Panthers are off to a 4-0 start to the season and they sit in second place in the AFC South. The Panthers offense is averaging 27 points and 322 yards per game and they are plus eight in turnover ratio. Panthers QB Cam Newton has completed 55.4 percent of his passes with seven touchdowns and two interceptions and he has rushed for 195 yards and two touchdowns. Jonathan Stewart is Carolina’s top rusher with 22 yards and Greg Olsen is the top pass catcher with 17.The Panthers defense is allowing 17.8 points and 339 yards per game with eight interceptions, nine sacks, and three fumble recoveries. Thomas Davis leads the Panthers with 36 tackles, A.J. Klein has 29 tackles, and Luke Keuchly has been listed as questionable and could play this week. The Panthers are one of the more physical teams in the NFL.

I don’t see a lot of points being scored in this one so my free pick is going to be on the under.

The pick in this article is the opinion of the writer, not a Sports Chat Place site consensus.
Previous Pick
Arizona Cardinals at Pittsburgh Steelers 10/18/15 NFL Score, Recap, News and Notes
Next Pick
49ers vs. Ravens - 10/18/15 NFL Pick, Odds, and Prediction