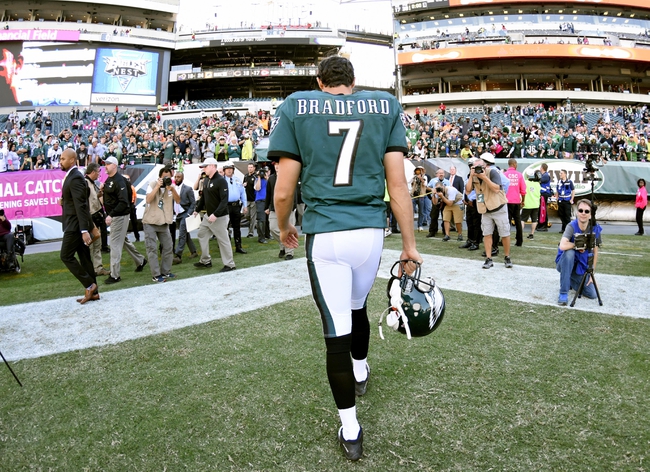 The New York Giants look for another big road win to build on their three-game winning streak. Eli Manning is completing 66.5 percent of his passes for 1,417 yards, 10 touchdowns and two interceptions. Manning has six touchdown passes in his last two games. Odell Beckham Jr. and Rueben Randle have combined for 645 receiving yards and five touchdowns while Shane Vereen has 20 receptions. The New York Giants ground game is averaging 91.2 yards per contest, and Rashad Jennings leads the way with 180 yards and one touchdown. Defensively, New York is allowing 21.8 points and 384.8 yards per game. Uani' Unga leads the Giants with 35 tackles, Damontre Moore has two sacks and Prince Amukamara has seven pass deflections. Odell Beckham, Victor Cruz and Jon Beason are questionable.

The Philadelphia Eagles need a big division win here to get back to a .500 record. Sam Bradford is completing 63.2 percent of his passes for 1,281 yards, eight touchdown and six interceptions. Bradford has five touchdown passes in his last two games. Jordan Matthews and Zach Ertz have combined for 489 receiving yards and one touchdown while Darren Sproles has 16 receptions. The Philadelphia Eagles ground game is averaging 93.2 yards per contest, and Ryan Mathews leads the way with 205 yards and two touchdowns. Defensively, Philly is allowing 20.6 points and 376.4 yards per game. Malcolm Jenkins leads the Eagles with 37 tackles, Fletcher Cox has four sacks and Walter Thurmond III has three interceptions. Brandon Bair, Mychal Kendricks and Nelson Agholor are questionable.

The Giants are banged up on the offensive end and the Eagles are coming off their best offensive perofrmance in which they scored 39 points. You get the feeling the Eagles are finally starting to turn things around, as they could easily have won three straight if it wasn't for a late comeback by Washington.

I like Philly and the reasonable chalk at home here.

The pick in this article is the opinion of the writer, not a Sports Chat Place site consensus.
Previous Pick
Browns vs. Broncos - 10/18/15 NFL Pick, Odds, and Prediction
Next Pick
Week 6 2015 NFL Football Picks, Odds, Previews and TV Info: October 15 - October 19 2015