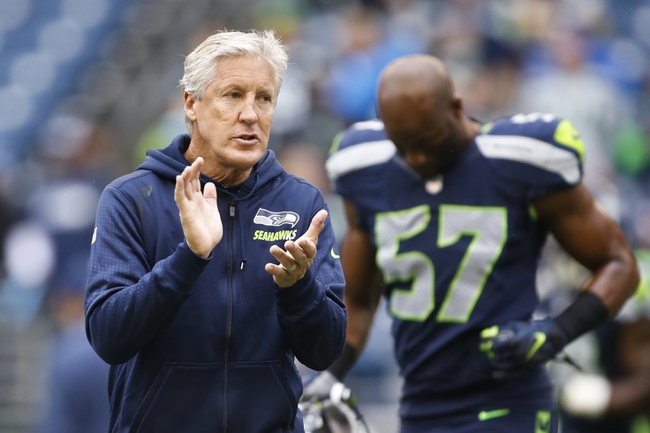 Kicking of the Week 7 schedule in the NFL on “Thursday Night Football,” we had a divisional matchup between the Seahawks and the 49ers. Seattle was coming off a rare home loss to Carolina, while San Francisco bagged a 5-point win over the Ravens in Week 6. The Seahawks have dominated the 49ers in recent games, and that trend continued here.
Let’s check out some of the key players and stats from this matchup to see why things played out the way they did. Afterward we’ll check out what’s in store for both teams in Week 8.

What Happened: Points are usually at a premium when these two teams meet, as they both tend to rely on their defenses. That’s the way it was on this evening as well. Seattle RB Marshawn Lynch got the scoring going after a nice drive in the first quarter, pounding in a one-yard run for the TD. It would be the only scoring of the quarter.
In the second, Seattle continued putting up points on a Steven Hauschka field goal from 49 yards out. The Seahawks would go up 17-0 on a Russell Wilson hookup with Tyler Lockett for 43 yards. That’s the way it would look at halftime, with Seattle owning a commanding lead.
After the break, the Niners finally got on the board with a 35-yard Phil Dawson field goal. Another Hauschka field goal from 46 yards would make it 20-7 in the fourth quarter, and that’s the way things would hold.
The Seahawks move to 3-4 with the victory, while the 49ers fall to 2-5. This is Seattle’s fourth straight win in this series.

The Stars: Offensively, there’s only one name that needs to go here. Marshawn Lynch dominated the game on 27 rushes for 122 yards and a touchdown. He helped keep the time of possession battle in Seattle’s favor 38:05 to 21:55.
The Seahawks defense also feasted on an inept Niners offense, holding the team to 142 net yards, eight first downs and a tepid 1-for-11 mark on third downs.

The Goats: Take your pick. Aside from getting run over by Lynch, the defense wasn’t terrible for the Niners, but it still wasn’t anywhere near acceptable. Colin Kaepernick was just 13-of-24 for 124 yards and didn’t get much help in the run game on 15 carries for 61 yards overall. It was simply a horrible evening all around for San Francisco.
Kaepernick was sacked six times for 43 lost yards, but Seattle also allowed five more sacks of Wilson, bringing his season total to a league-leading 31.

Injuries: Both teams seemed to be pretty fortunate with injuries here, both before and during the game. Lynch was seen vomiting on the sideline early on, which was reportedly due to him being winded during the opening drive.

Outlook: Looking ahead to Week 8, both teams will be back in action on Sunday, November 1 on FOX. The 49ers will head to St. Louis to take on the Rams (1:00 PM ET), while the Seahawks will go to Dallas to see the Cowboys (4:25 PM ET).

The pick in this article is the opinion of the writer, not a Sports Chat Place site consensus.
Previous Pick
49ers vs. Seahawks - 10/22/15 NFL Pick, Odds, and Prediction
Next Pick
NFL News: Player News and Updates for 10/24/15