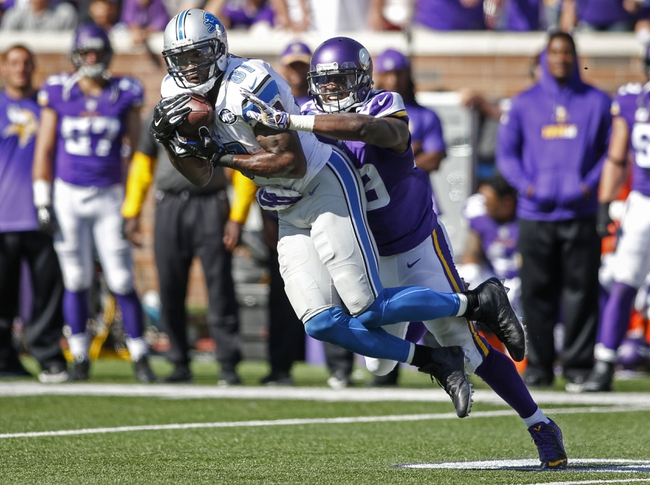 The Detroit Lions and the Minnesota Vikings face off on Sunday at Ford Field for a NFL Week 7 battle of NFC North teams.

The Detroit Lions are 1-5 this season and are coming off of their first win last Sunday. The Lions offense is averaging 20 points and 358.7 yards per game with a minus eight turnover ratio. Lions QB Matthew Stafford has completed 64.6 percent of his passes with 10 touchdowns and nine interceptions. Ameer Abdullah leads the Lions rushing attack with 179 yards and a touchdown and Calvin Johnson is the leading receiver with 38 receptions and Theo Riddick has 33 catches. The Lions defense is allowing 28.7 points and 386.8 yards per game with four interceptions, 7 fumble recoveries, and 13 sacks. Stephen Tulloch leads the Lions with 48 tackles, Josh Bynes has 39 tackles, and James Ihedigbo has 34 tackles. The Lions have been beaten up in the trenches and it has made it difficult everywhere else for them.

The Minnesota Vikings are 3-2 this season that puts them in second place in the NFC North. The Vikings offense is averaging 19.2 points and 305.6 yards per game and they are plus three in turnover ratio. Vikings QB Teddy Bridgewater has completed 64.4 percent of his passes with three touchdowns and four interceptions. Adrian Peterson in Minnesota’s top option in the rushing department with 432 yards and three touchdowns and Mike Wallace is the top receiver with 22 catches. The Vikings defense is allowing 16.6 points and 351.8 yards with four interceptions, four fumble recoveries, and 10 sacks. Eric Kendricks leads the Vikings with 29 tackles, Harrison Smith has 28 tackles, and Anthony Barr has 27 tackles. The Vikings have one of the lowest ranked offenses at 29th and the second ranked defense is the NFL.

The Vikings will need to run the football because Bridgewater isn’t going to beat anyone so while the Lions defense isn’t very good I like them to get the win here.