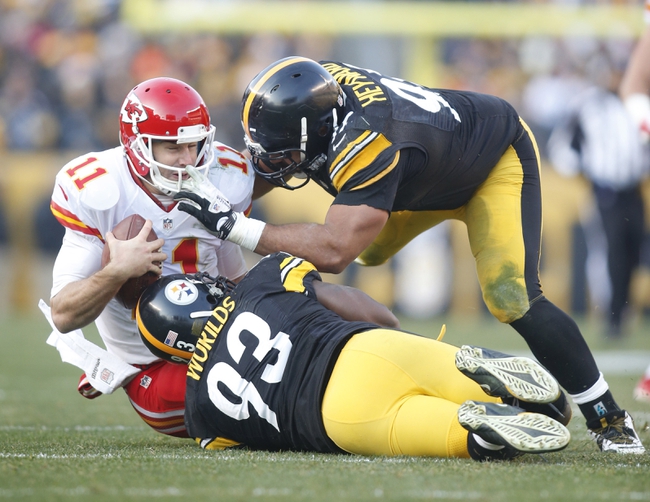 The Kansas City Chiefs and the Pittsburgh Steelers face off on Sunday at Arrowhead Stadium in a week 7 NFL matchup.

The Kansas City Chiefs are off to a disappointing 1-5 start as the injuries are mounting and the losses are piling up. The Chiefs offense is averaging 21.2 points and 341 yards per game and they are minus two in turnover ratio. Kansas City QB Alex Smith has completed 62.4 percent of his passes with six touchdowns and three interceptions. Charcandrick West leads the KC ground attack with 3.9 yards per carry average and Jeremy Maclin is the top receiver with 39 receptions and Travis Kelce has 29 catches. The Chiefs defense is allowing 26.5 points and 372.8 yards with four interceptions, three fumble recoveries and 13 sacks. Derrick Johnson leads the Chiefs with 34 tackles, Marcus Peters has 31 tackles and three interceptions, and Allen Bailey ha 4.5 sacks. The Chiefs pass rushing numbers are way down this season as their opponents have turned to the run as KC has been trailing for the bulk of the action.

The Pittsburgh Steelers are 4-2 this season and they sit in second place in the AFC North. The Steelers offense is averaging 24.2 points and 349.7 yards per game and they are plus six in turnover ratio. Landry Jones appears to be the new Pittsburgh QB coming in last week and completing 66.7 percent of his passes with two touchdowns. Le’Veon Bell is the Steelers top rusher with a 4.5 yards per carry and three touchdowns and Antonio Brown has 40 receptions and two touchdowns. The Steelers defense is allowing 18 points and 376.5 yards per game with five interceptions, five fumble recoveries, and 17 sacks. Lawrence Timmons is the Steelers leading tackler with 44 tackles, Antwon Blake has 39 tackles, and Will Allen has 31 tackles. The Steelers are holding their own even without Ben Roethlisberger. ]

I am not expecting a ton of offense here so my free pick is under the total which is at 43.