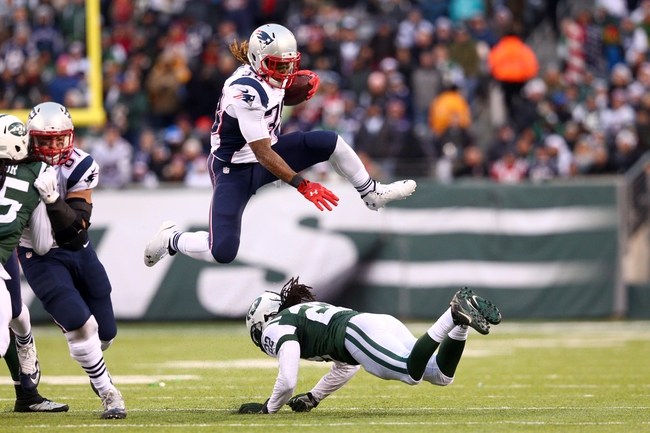 The New England Patriots and New York Jets face off on Sunday in a NFL AFC East week 7 battle.

The New England Patriots are 5-0 and in first place in the AFC East. The Patriots offense is averaging 36.6 points and 422.4 yards per game and they are plus four in turnover ratio. Pats QB Tom Brady has completed 70.6 percent of his passes with 14 touchdowns and an interception. LeGarrette Blount is New England’s top rusher with 249 yards and four touchdowns and Julian Edelman has 40 receptions and four touchdowns and Rob Gronkowski has 23 catches and five touchdowns. The Patriots defense is allowing 20.6 points and 355.8 yards per game with six interceptions, five fumble recoveries, and 19 sacks. Jamie Collins leads the Patriots with 37 tackles and 3.5 sacks, Devin McCourty has 29 tackles, and Chandler Jones has 5.5 sacks. New England has given up late scores to allow other teams to dress up the score but they have been convincing winners in all of their games.

The New York Jets are off to a 4-1 start that puts the in second place in the AFC East. The jets offense is averaging 25.8 points and 379.8 yards per game and they have a plus five turnover ratio. Jets QB Ryan Fitzpatrick has completed 62.6 percent of his passes with nine touchdowns and seven interceptions. Chris Ivory leads the New York ground attack with 460 yards and four touchdowns and Brandon Marshall has 37 catches and four touchdowns. The Jets defense is the best in the NFL allowing 15 points and 269.2 yards per game with eight interceptions, seven fumble recoveries, and eight sacks. David Harris is the Jets top tackler with 38 tackles, Demario Davis has 31 tackles, and Calvin Pryor has 30 tackles. The Jets are looking to grab a share of first place with a win here.

This is just a ton of points for this matchup and I have no choice but to take them with the best defense in football.