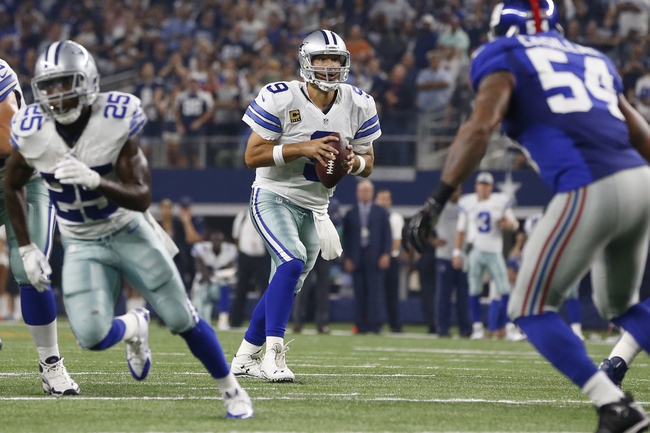 The New York Giants and the Dallas Cowboys face off on Sunday at MetLife Stadium in a week 7 NFL NFC East matchup.

The New York Giants are 3-3 this season and they are looking to bounce back from a one sided loss to the Eagles on Monday Night. The Giants offense is averaging 23.2 points and 352.5 yards and they are plus six in turnover ratio. New York QB Eli Manning has completed 66 percent of his passes with 11 touchdowns and four interceptions. Rashad Jennings leads the Giants in rushing with 243 yards and Odell Beckham leads in receptions with 38 and four touchdowns. The Giants defense is allowing 22.7 points and 391.5 yards with eight interceptions, nine fumble recoveries, and eight sacks. Uani’ Unga has 42 tackles, Brandon Meriweather has 34 tackles, and Landon Collins has 33 tackles. The Giants looked lost against the Eagles after their opening drive.

The Dallas Cowboys are 2-3 this season and they are looking to hold on until their injured stars return. The Cowboys offense is averaging 20.2 points and 348.2 yards per game with a minus five turnover ratio. After Brandon Weeden was ineffective as the Dallas QB he has been replaced by Matt Cassel who make his first start. Joseph Randle is the Cowboys leading rusher with 289 yards and four touchdowns and Jason Witten is the top pass catcher with 30 receptions and two touchdowns. The Cowboys defense is allowing 26.2 points and 349.4 yards per game with two interceptions, one fumble recovery, and 11 sacks. Sean Lee leads the Cowboys with 41 tackles, Barry Church has 37 tackles, and Anthony Hitchens has 32 tackles. The Cowboys are looking for answers in hopes the season isn’t a lost cause.

The Giants looked awful but Cassel isn’t a viable option at QB and the Giants win.