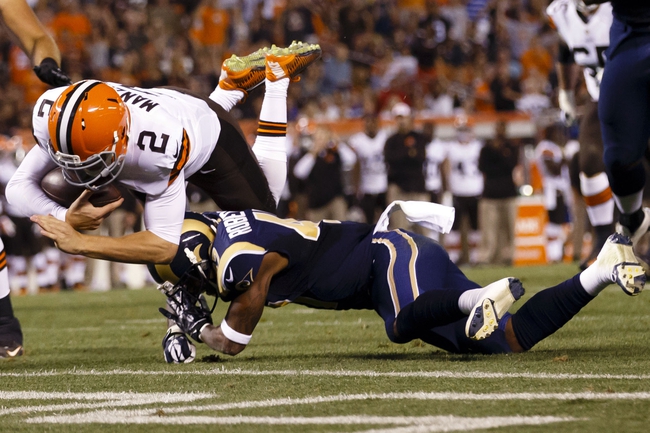 The St. Louis Rams and the Cleveland Browns face off on Sunday at the Edward Jones Dome in Week 7 NFL action.

The St. Louis Rams are 2-3 this season and they sit in second place in the NFC West. The Rams offense ranks 31st with 16.8 points per game and 32nd with 297 yards per game and they are plus one in turnover ratio. St. Louis QB Nick Foles has completed 57.4 percent of his passes with six touchdowns and five interceptions. Todd Gurley leads the Rams ground attack with 314 yards and Tavon Austin has 16 catches and three touchdowns and Jared Cook has 15 catches. The Rams defense is allowing 22.6 points and 348.8 yards per game with five interceptions, sox fumble recoveries, and 19 sacks. Alec Ogletree is the Rams leading tackler with 42, James Laurinaitis has 37 tackles, and Lamarcus Joyner has 29 tackles. The Rams offense just isn’t clicking with Foles at QB and they have ben a disappointment.

The Cleveland Browns are 2-4 this season and are looking to be further away from turning things around than many thought. The Browns offense is averaging 23.5 points and 364.2 yards and they have a minus three turnover ratio. Browns QB Josh McCown has completed 64.4 percent of his passes with eight touchdowns and three interceptions. Isaiah Crowell leads Cleveland in rushing with 272 yards and Travis Benjamin has 31 catches and four touchdowns and Gary Barnidge has 27 catches and five touchdowns. The Browns defense is allowing 26.3 points and 407.3 yards with four interceptions, five fumble recoveries, and 10 sacks. Karlos Dansby has 47 tackles to lead the Browns, Donte Whitner has 45 tackles, and Chris Kirksey has 29 tackles. The Browns defense just has let the offense down and offensively the O-line has allowed far too much penetration.

This game is likely a close one and the points should be good enough if the Browns lose the game.