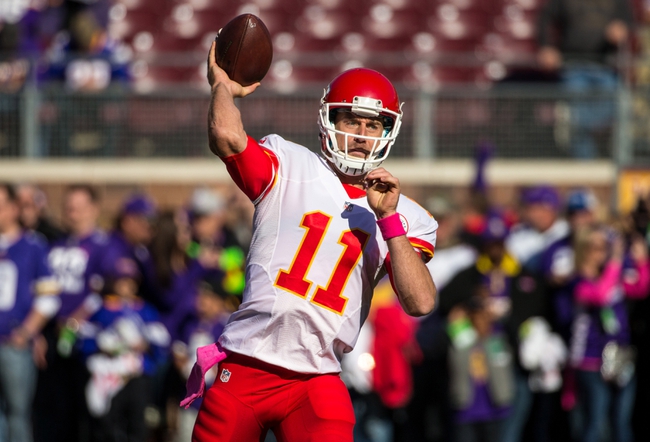 The Pittsburgh Steelers look to win their third road game of the year to string together three straight wins. Landry Jones is completing 66.7 percent of his passes for 168 yards, two touchdowns and zero interceptions. Ben Roethlisberger is questionable with a knee injury. Antonio Brown and Markus Wheaton have combined for 783 receiving yards and three touchdowns while Darrius Heyward-Bey has 17 receptions. The Pittsburgh Steelers ground game is averaging 123.8 yards per contest, and Le'Veon Bell leads the way with 390 yards and three touchdowns. Defensively, Pittsburgh is allowing 18 point and 376.5 yards per game. Lawrence Timmons leads the Steelers with 44 tackles, Stephon Tuitt has 3.5 sacks and Antwon Blake has five pass deflections. Stephon Tuitt, Cortez Allen and Jarvis Jones are questionable.

The Kansas City Chiefs need a victory in order to snap a tough five-game losing streak. Alex Smith is completing 62.4 percent of his passes for 1,573 yards, six touchdowns and three interceptions. Smith has not thrown a pick in three straight games. Jeremy Maclin and Travis Kelce have combined for 947 receiving yards and three touchdowns while Chris Conley has seven receptions. The Kansas City Chiefs ground game is averaging 101 yards per game and Smith leads the way with 119 yards on 28 carries. Defensively, Kansas City is allowing 26.5 points and 372.8 yards per game. Derrick Johnson leads the Chiefs with 34 tackles, Allen Bailey has 4.5 sacks and Marcus Peters has three interceptions. Dontari Poe, Jeremy Maclin and Mike DeVito are questionable.

I don't like the Chiefs at all. Kansas City struggles to move the ball and that's become an even bigger issue with Charles sidelined for the remainer of the season. Although Big Ben will wait another week to take the field, the Steelers are still playing well and have enough playmakers to steal another game without their starting quarterback.