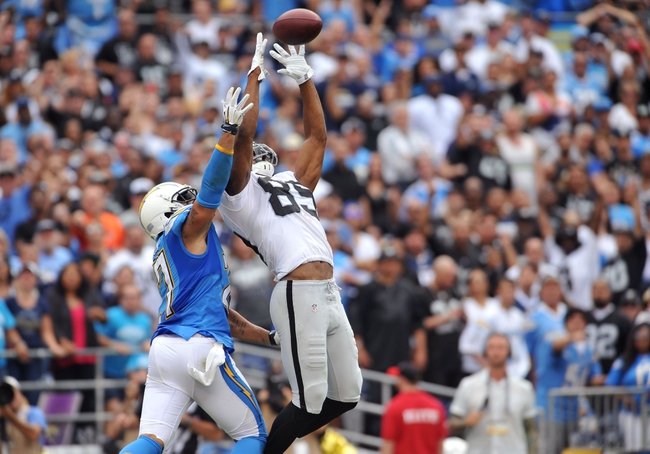 Week 7 in the NFL is just about finished up, but we’ve still got one more game to go before we move on. In the meantime, let’s check out some of the notable players and situations out there.

Eagles-Panthers Wrap-Up: The Panthers are now 6-0 for the first time in franchise history, following a big 27-16 win over the Eagles on “Sunday Night Football” last night.
Cam Newton threw for one touchdown and posted another rush score. It’s the 28th time in his career he’s done that, which is just three behind former 49er Steve Young, who holds the NFL record.
Jonathan Stewart helped out on the ground with 119 yards and Mike Tolbert added a pair of scores. Carolina has now won 10 straight regular-season games overall.

We’ve heard this one before, but the Giants’ Jason Pierre-Paul is scheduled to report to the team today or tomorrow.
Pierre-Paul was supposedly going to show up last week, but didn’t. It’s likely he’s going to work out some sort of deal with the team so that he can recoup some of his money this year. He’ll need to pass his physical if he wants to earn his salary on the franchise tender.

The Raiders’ Amari Cooper pulled down five catches (six targets) for 133 yards and a score yesterday in a big win over the Chargers.
Cooper’s main highlight here was his 52-yard TD grab off a bubble screen. He’ll get a difficult matchup next week against Darrelle Revis and the Jets.

Dez Bryant continues to draw closer to a return for the Cowboys, and do they ever need him right now.
Bryant reportedly looked good in his pregame workout yesterday and is around coin-flip odds to take the field next week. If not, he should be back in action by Week 9.

The Colts looked sketchy in another loss yesterday, this time to the Saints. They were playing from behind for the entire game, and were only able to close the gap later on in the game.
Indy’s schedule doesn’t get any easier over the next handful of games. Next up, they’ve got the unbeaten Panthers. The AFC South could get very interesting in the next month or two.