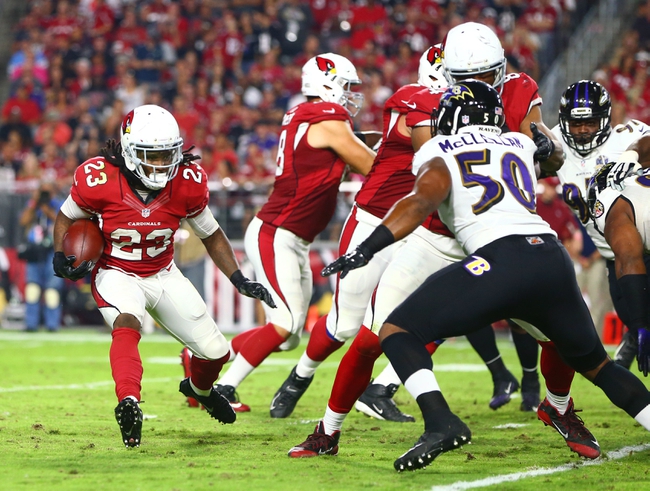 Finishing up the Week 7 NFL schedule on “Monday Night Football,” we had an AFC-NFC clash between the Ravens and the Cardinals. Baltimore was coming off a loss to the 49ers, while Arizona fell to the Steelers in Week 6. Both teams obviously needed a good showing here.
Let’s check out a few of the key stats and notable players so we can figure out why things played out the way they did. Afterward, we’ll look ahead to Week 8 to see what’s in store for both teams.

What Happened: Things started out pretty tight in this one. Justin Tucker would make the Ravens the first team on the board with a 44-yard field goal. The Cardinals would respond with a 26-yard Chris Johnson TD run, making it 7-3 at the end of the first quarter.
The teams traded touchdowns in the second. First came Justin Forsett’s 14-yard run, which put the Ravens up briefly. Malcolm Floyd would bag a 3-yard TD pass from Carson Palmer to regain the lead for the Cardinals 14-10 heading into the locker room.
After the break, the Cards put up a pair of field goals from Catanzaro, both from 21 yards out. Josh Brown would snag a 4-yard TD pass from Palmer late in the fourth quarter to seemingly put the game away, but a blocked punt led to a Kyle Juszczyk TD grab from Joe Flacco.
The Ravens would get the ball back and have a chance to tie it up, driving all the way down to the Cardinals’ end zone. Arizona would come up with a big interception that would end it and seal the game for the Cards. Final score: 26-18.
Arizona moves to 5-2 with the win, while the Ravens fall to 1-6 in what’s been a lost season for them.

The Stars: Johnson was running all over the place in this one, tallying 122 yards and a score on 18 carries. His biggest run went 62 yards, when he rolled over a defender and kept going. Palmer was also solid with 275 yards and two scores on 20-of-29 passing.
On the other side, there’s not a whole lot to write home about. Steve Smith had five receptions for 78 yards as he continues to defy his age.

The Goats: The Ravens couldn’t get much going on the ground. Forsett rushed 12 times for 36 total yards. As a team, they’d come up with just 276 total yards.
The Ravens defense allowed an average of 7.0 yards per play and 150 net yards rushing.
Baltimore was also flagged nine times for 64 critical yards and had two turnovers to Arizona’s zero.

Injuries: The Cardinals lost CB Jerraud Powers late in the first half due to a hamstring injury. He would be unable to return. Powers had some hamstring issues in the preseason as well.

Outlook: Looking ahead to Week 8, both teams will be back in action on Sunday, Nov. 1 at 1:00 PM ET. The Cardinals will head to Cleveland to see the Browns (FOX), while the Ravens host the Chargers (CBS)