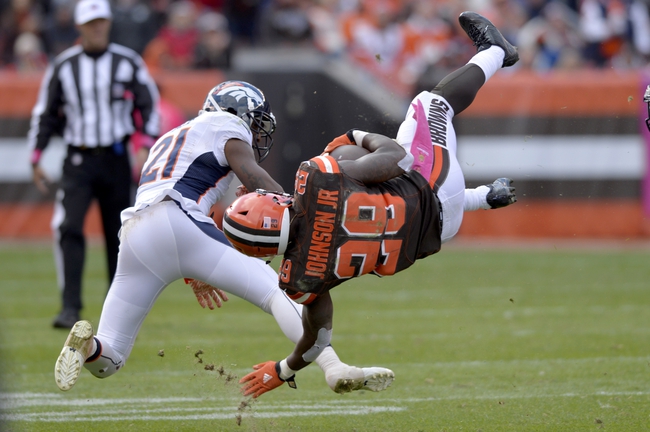 Which NFL Match Ups Should I Watch This Weekend?

Week 8 officially kicks-off tonight with the Miami Dolphins taking on the undefeated New England Patriots in Foxboro. Until then, though, we’ve got some time to kill. Read on to see my top ten match-ups of the weekend.

Rodgers is good. Probably the best in the league. This is no secret. However, in the past three weeks, the reigning league MVP has had just five touchdowns to three interceptions. The Broncos have a wicked secondary, featuring Aqib Talilb and Chris Harris, so it’ll be fun to see if Rodgers can pull off a big win against them. One bright side for Pack Nation: Davante Adams is up and running this week.

Rookie Cooper has been playing veteran-style ball and looked solid against the San Diego Chargers’ Jason Verrett last week. In Week 8, Cooper will have to take-on Revis Island, which won’t be an easy task any way you slice it. For the first time in years, this game could have wildcard implications, so it’s a much needed win for both clubs. Look for an all-out battle at the Black Hole.

Wake has notched six sacks in two games and has a huge chance tonight with Tom Brady under center. The Pats have…struggled…to put it nicely at the right tackle position this year. Nate Solder suffered a bicep injury that left him sidelined for the year. Enter Marcus Cannon. Cannon suffered a toe injury in Week 5 and his status for tonight is still unknown. If Cannon can’t go, he’ll play left tackle with Sebastian Vollmer on the right side. If he can’t, Vollmer will be on the left with Cameron Fleming on the right. Phew. Got all that? No matter what, it’s safe to say that Wake has a massive advantage.

Norman is fast making his mark as one of the best cover corners in the NFL. Last week against the Philadelphia Eagles, he allowed just a single task. This isn’t great news for a struggling Colts offense. Hilton, though, had a breakout game against the New Orleans Saints last week, finally appearing to hit his stride. We’ll see if Hilton can keep his momentum going against Norman’s vicious D come Monday night. I’ll be in Carolina with bells on, y’all.

With Joseph Randle dealing with an injury this week, McFadden should take most of the snaps when the Dallas Cowboys face the ‘Hawks. McFadden looked good, notching 152 yards and a touchdown, against the New York Giants, but Seattle’s run defense is another animal. They’re allowing just 94.1 yards per game. If McFadden has a big game, the ‘Boys could avoid their fifth loss in a row, but it’s going to take a near miracle.

The Steelers are going to be out for blood at home against their division leaders this week, especially if Ben Roethlisberger is back on the field. I look for them to double-team, triple-team, and do everything short of carrying A.J. Green off the field. This presents a huge opportunity for Jones (AKA. the Bengals wideout who isn’t Green). If he and Dalton can get something going, the Bengals have an opportunity to go 7-0 at one of the league’s toughest stadiums.

Gronk is impossible to cover. This is the furthest thing from news. Tonight, though, after getting pick-sixes in each of the past two weeks, Jones will get a chance to really show what he can do against one of the league’s roughest tight ends. I never thought I’d be typing this, but I think he might actually be up for the job.

I know, I know. This doesn’t sound all that exciting. The Saints D has been painful for most of the season and Manning hasn’t exactly looked his best, to put it nicely. However, after nearly shutting down Andrew Luck and the Colts last Sunday, I look for the Saints to be absolutely fired up as they take-on a Giants team that has looked pretty darn good over the past couple of weeks.

We’re going to completely ignore Hardy’s shortcomings as a human being and focus on him as a football player, where, you must admit, he’s extremely talented. Hardy has had three sacks in his first two games in the Big D and he’s facing a Seahawks offensive line that has been ranked last in the league this year (that’s worse even than my Colts, which takes some doin’). Hardy will be matched-up against Okung, who happens to be the best player on the Hawks dismal line, so it could get interesting.

The Vikings have made things pretty tough for opposing quarterbacks this year, notching 17.0 sacks so far. The 2015 Bears are certainly nothing to write home about, but coming-off their bye, I’m interested to see how Cutler handles things with a healthy Alshon Jeffery and Eddie Royal at his disposal.

The pick in this article is the opinion of the writer, not a Sports Chat Place site consensus.
Previous Pick
Patriots vs. Dolphins - 10/29/15 NFL Pick, Odds, and Prediction
Next Pick
NFL News: Player News and Updates for 10/31/15