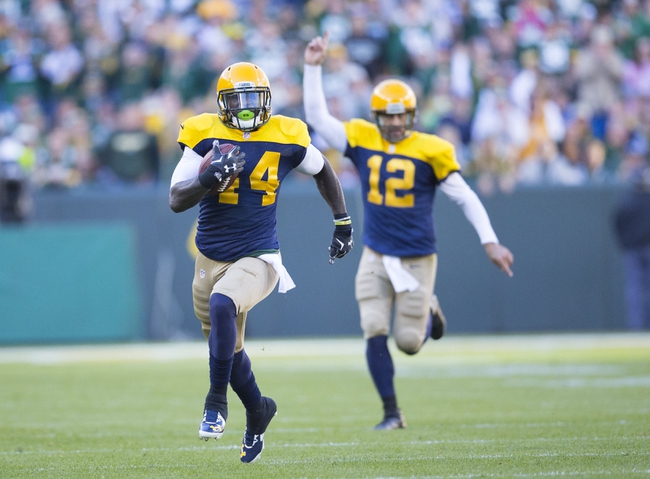 We’ve got just one more day to wait until Week 8 gets going again in the NFL, but there’s plenty to talk about in the meantime. Let’s look at a few of the injury situations and headlines from around the league.

Let’s start things out today by taking a look at a few Packers players. First there’s Ty Montgomery, who gets a questionable tag for tomorrow’s huge game against the undefeated Broncos. After not practicing at all this week, no one is really expecting him to play.
Davante Adams should be able to play. He’s down as probable with his ankle issue and will be the team’s No. 3 receiver tomorrow.
As for James Starks, he’s questionable with his hip injury. We probably won’t know whether or not he’ll be able to go until near game time.

The Jets also have a few injury concerns heading into tomorrow’s game in Oakland. Most notably, No. 2 WR Eric Decker is listed as questionable with a knee issue.
That said, sources close to the team expect that Decker will be able to take the field. He was limited in practice Thursday and yesterday.

Will we finally be able to see Dez Bryant again tomorrow against the Seahawks? That seems to be the assumption around the league, even though he’s listed as questionable with his foot injury.
Bryant didn’t pick a very good week to come back, if indeed he does. He’ll get a tough matchup against Seattle here.

You can pretty much bet that the Bucs’ Vincent Jackson won’t be playing tomorrow. He’s listed as doubtful for the Week 8 matchup against Atlanta.
Jackson will probably be able to come back within the next few weeks, so we’ll see how he heals up.

The odds aren’t in favor of Chargers TE Antonio Gates playing against the Ravens this week. He’s listed as questionable with his sprained MCL.
Gates didn’t practice all week--not that he needs to--so that’s not encouraging. You can expect to see Ladarius Green in the starting TE role once again.

The pick in this article is the opinion of the writer, not a Sports Chat Place site consensus.
Previous Pick
Top Ten NFL Week 8 Match Ups to Watch
Next Pick
Cincinnati Bengals at Pittsburgh Steelers 11/1/15 NFL Score, Recap, News and Notes