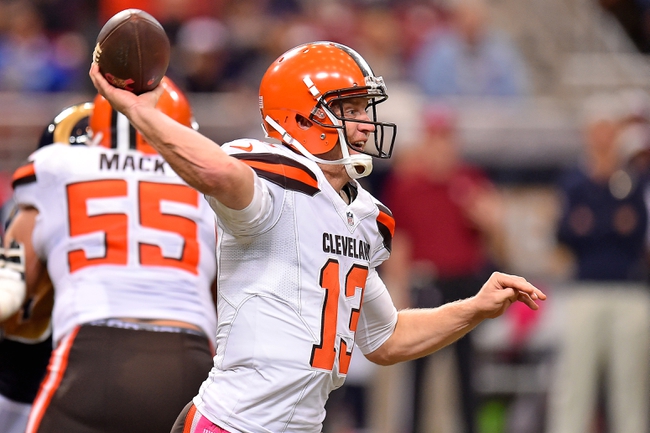 The Arizona Cardinals look for a big road win after splitting their last four games. Carson Palmer is completing 65.3 percent of his passes for 2,012 yards, 16 touchdowns and five interceptions. Palmer has six touchdown passes in his last three games. Larry Fitzgerald and John Brown have combined for 1,184 receiving yards and nine touchdowns while Michael Floyd has 16 receptions. The Arizona Cardinals ground game is averaging 125.6 yards per contest, and Chris Johnson leads the way with 567 yards and three touchdowns. Defensively, Arizona is allowing 19 points and 321.1 yards per game. Deone Bucannon leads the Cardinals with 51 tackles, Frostee Rucker has two sacks and Tyrann Mathieu has eight pass deflections. Frostee Rucker, John Brown and Lyle Sendlein are questionable.

The Cleveland Browns could use a win after losing four of their last five games. Josh McCown is completing 66.8 percent of his passes for 1,686 yards, eight touchdowns and three interceptions. McCown is questionable with a shoulder injury. Travis Benjamin and Gary Barnidge have combined for 1,089 receiving yards and nine touchdowns while Duke Johnson Jr. has 31 receptions. The Cleveland Browns ground game is averaging 90.4 yards per contest, and Isaiah Crowell leads the way with 281 yards and one touchdown. Defensively, Cleveland is allowing 26 points and 393.1 yards per game. Karlos Dansby leads the Browns with 54 tackles, Armonty Bryant has 3.5 sacks and Pierre Desir has five pass deflections. Jordan Poyer, Andrew Hawkins and Charles Gaines are questionable.

The Browns don't have the horses to run with the Cardinals, a team that also plays defense and creates turnovers. I see Arizona rolling in this game and winning by double digits.