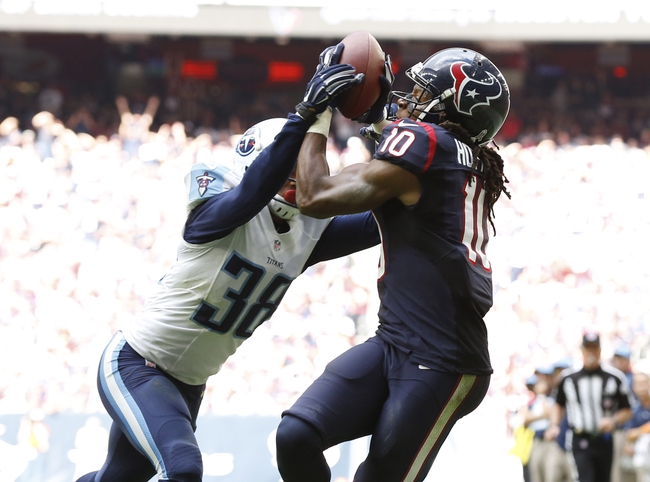 The Houston Texans and the Tennessee Titans face off on Sunday at NRG Stadium in a week 8 NFL battle of AFC South teams.

The Houston Texans are struggling once again this season and they don’t appear to be any closer to finding answers. The Texans offense is averaging 22 points and 383.6 yards per game and they have a minus five turnover ratio. Texans QB Brian Hoyer has completed 58.9 percent of his passes with 11 touchdowns and three interceptions. With Arian Foster done for the year Alfred Blue leads the Houston rushing attack with 234 yards and DeAndre Hopkins is the top receiver with 58 receptions and five touchdowns. Defensively the Texans are allowing 28.4 points and 370.9 yards per game with five interceptions, two fumble recoveries, and 13 sacks. Brian Cushing leads the Texans with 55 tackles, J.J. Watt has 35 tackles including 6.0 sacks, and Andre Hal has two interceptions. As bad as it has been for the Texans they are in second place in the AFC South.

The Tennessee Titans are still in rebuilding mode and they are 1-5 this season losing their last five games. The Titans offense is averaging 19.8 points and 326.3 yards per game and they are minus four in turnover ratio. Titans QB Marcus Mariota’s status is still up in the air for this one after missing last week but if he can’ go it will be Zach Mettenberger. Bishop Sankey leads the Titans in rushing with 159 yards and Delanie Walker is the top receiver with 29 catches and Kendall Wright has 24 catches and three touchdowns. The Titans defense is allowing 23.2 points and 324.3 yards per game with eight interceptions, six fumble recoveries, and 15 sacks. Zach Brown leads Tennessee with 29 tackles, Wesley Woodyard has 23 tackles, and Derrick Morgan has 4.5 sacks. The Titans appear to be putting the pieces into place but they are still missing several of them.

Because of the status of Marcus Mariota the line for this game isn’t out yet so please check back and I will update this with my free pick.

Mitch’s Pick Please check back when line is released