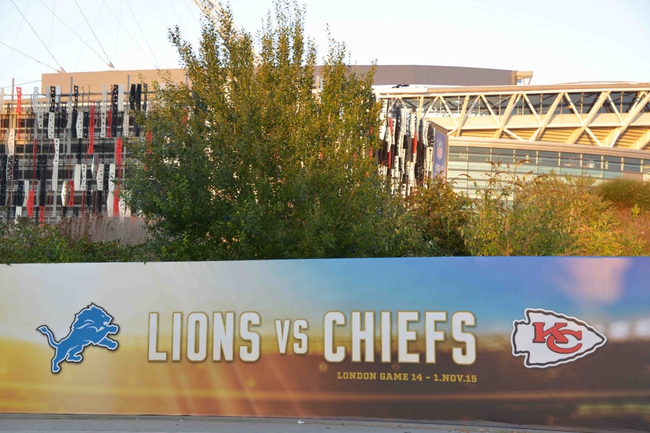 The Kansas City Chefs and the Detroit Lions face off in London n a week 8 NFL football match up.

The Kansas City Chiefs have had a rough season sitting at 2-5 but they are coming off of win over the Steelers last week. The Chiefs offense is averaging 21.4 points and 346.1 yards per game and they have a plus one turnover ratio. KC QB Alex Smith has completed 62.8 percent of his passes with seven touchdowns and three interceptions. Jamaal Charles is out so Charcandrick West has taken over the bulk of the carries in he Kansas City backfield averaging 4.4 yards per carry and Jeremy Maclin is the op receiver with 39 catches and Travis Kelce has 34 catches. The Chiefs defense is allowing 24.6 points and 368 yards per game with six interceptions, four fumble recoveries, and 15 sacks. Derrick Johnson leads the Chiefs with 38 tackles, Marcus Peters had 35 tackles, and Ron Parker has 33 tackles. The Chiefs have little room for error left if they hope to salvage their season.

The Detroit Lions are having the worst season in the NFL and they sit at 1-6 entering this week. The Lions offense is averaging 19.9 points and 346.6 yards per game and they are minus seven in turnover ratio. Lions QB Matthew Stafford has completed 65 percent of his passes with 12 touchdowns and nine interceptions. Rookie running back Ameer Abdullah leads Detroit in rushing with 222 yards and Calvin Johnson has 43 catches and three touchdowns. The Lions defense is allowing 28.6 points and 392.3 yards per game with four interceptions, nine fumble recoveries, and 17 sacks. Stephen Tulloch leads the Lions with 56 tackles, Josh Bynes has 47 tackles, and Ezekiel Ansah has 6.0 sacks. At this point anything short of a win could make the rest of the season a lost cause for the Lions.

The Chiefs are favored by six points here but either of these teams can get out of their own way so I will take the six points with the Lions and will hopefully still be in bed by the time this is over so I don’t bet it.

The pick in this article is the opinion of the writer, not a Sports Chat Place site consensus.
Previous Pick
Broncos vs. Packers - 11/1/15 NFL Pick, Odds, and Prediction
Next Pick
Green Bay Packers at Denver Broncos 11/1/15 NFL Score, Recap, News and Notes