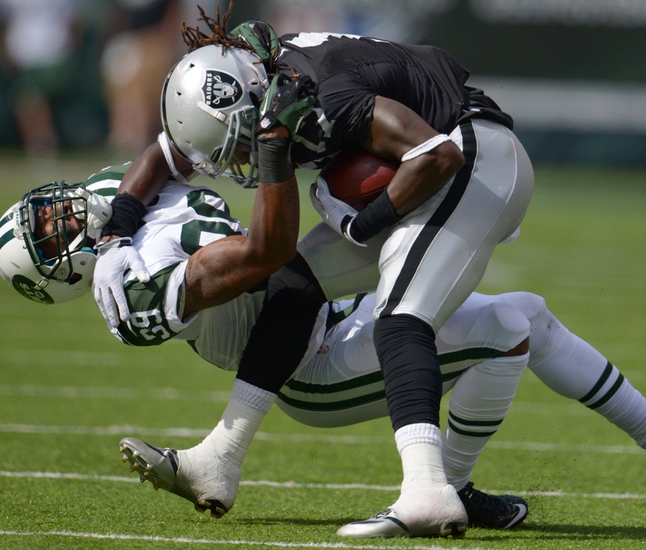 The Oakland Raiders and the New York Jets face off on Sunday in Oakland in a week 8 NFL battle of up and coming teams.

The Oakland Raiders are off to a 3-3 start and are coming off of an impressive win blowing out the Chargers in San Diego. The Raiders offense is averaging 24 points and 351 yards per game and they have a plus two turnover ratio. Raiders QB Derek Carr has completed 65.8 percent of his passes with 11 touchdowns and three interceptions. Latavius Murray leads the Oakland ground attack with 421 yards and three touchdowns and Amari Cooper and Michael Crabtree are the top receivers with 33 receptions each. The Raiders defense is allowing 25.5 points and 388.2 yards per game with seven interceptions, five fumble recoveries, and 11 sacks. Malcolm Smith leads the Silver and Black with 51 tackles and three sacks, and D.J. Hayden and Curtis Lofton have 33 tackles each. The Raiders have played tough and if they can stay healthy for the next 10 games they are a legitimate threat to make the playoffs.

The New York Jets are 4-2 this season and they are coming off of a tough loss at New England in a game they had many chances to win. The jets offense is averaging 25.3 points and 378.5 yards per game and they have a plus four turnover ratio. New York QB Ryan Fitzpatrick has completed 61.4 percent of his passes with 11 touchdowns and seven interceptions. Chris Ivory leads the Jets rushing attack with 501 yards and four touchdowns and Brandon Marshall has 41 receptions and four touchdowns. The Jets defense is allowing just 17.5 points and 283.2 yards per game with eight interceptions, eight fumble recoveries, and 11 sacks. David Harris is the leader of the Jets defense with 41 tackles, Demario Davis has 37 tackles, and Darrelle Revis has three interceptions. The Jets have played it fairly conservative but the few sacks they allow and mistakes they make is what has kept them in every game this year.

This should be a good one and with the Jets playing back-to-back weeks on the road I have to give the edge to the Raiders getting the small number.

The pick in this article is the opinion of the writer, not a Sports Chat Place site consensus.
Previous Pick
Cincinnati Bengals at Pittsburgh Steelers 11/1/15 NFL Score, Recap, News and Notes
Next Pick
Cowboys vs. Seahawks - 11/1/15 NFL Pick, Odds, and Prediction