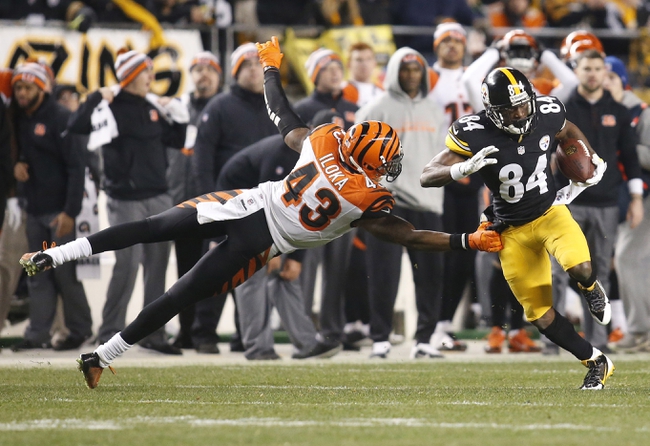 The Pittsburgh Steelers and the Cincinnati Bengals face off on Sunday at Heinz Field for a week 8 AFC North NFL battle.

The Pittsburgh Steelers are 4-3 this season and they sit in second place in the AFC North. The Steelers offense is averaging 22.6 points and 348.1 yards per game and they are plus three in turnovers. Pittsburgh QB Ben Roethlisberger is expected to return this week after missing several weeks with an injury and before he went out he was completing 75.3 percent of his passes with four touchdowns and three interceptions. Le’Veon Bell leads the Steelers rushing attack with 671 yards and Antonio Brown is their top receiver with 46 catches. The Steelers defense is allowing 18.7 points and 376.6 yards per game with five interceptions, five fumble recoveries, and 19 sacks. Lawrence Timmons leads the Steelers with 54 tackles, Antwon Blake has 41 tackles, and Mike Mitchell has 34 tackles. The Steelers are hoping the return of Roethlisberger will be the difference maker that makes them a true contender to win it all.

The Cincinnati Bengals are one of the last unbeaten teams in the NFL and with a win here can put up an almost insurmountable lead in the AFC North. The Bengals offense is averaging 30.3 points and 410.3 yards per game and they are plus three in turnover ratio. Cincinnati QB Andy Dalton has completed 67.4 percent of his passes with 14 touchdowns and two interceptions. Giovani Bernard leads the Bengals in rushing with 427 yards and A.J. Green is their top receiver with 35 catches and three touchdowns. The Bengals defense is allowing 20.3 points and 370.7 yards per game with five interceptions, five fumble recoveries, and 17 sacks. Vincent Rey leads the defense with 57 tackles, Adam Jones has 36 tackles, and Carlos Dunlap has 6.5 sacks. The Bengals are clearly among the elite in the NFL this season.

The total is set 48.5 and I have this one going over the total. I also have a pick on who will cover the spread and I will have that in the Premium Area.