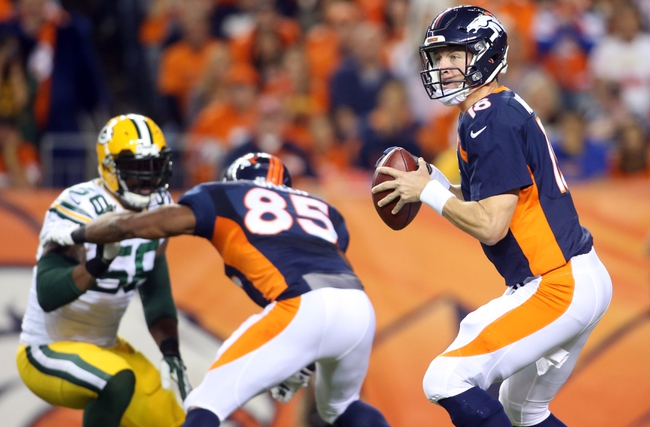 Wrapping up the Week 8 NFL Sunday schedule on “Sunday Night Football,” we had a great-looking matchup between a pair of unbeaten teams in the Packers and Broncos. Both teams were on a bye in Week 7, so they each came into this one fresh and prepared. This wasn’t quite the offensive shootout we all envisioned, however.
Let’s take a closer look at some of the key players and stats from the game so we can figure out why things played out the way they did. Afterward we’ll look ahead to Week 9 to see what’s in store for both teams.

What Happened: The Broncos came out strong with a statement drive in the first quarter, finishing off an 83-yard march with a 1-yard Ronnie Hillman TD run. It would prove to be the only scoring of the quarter.
In the second, Hillman bagged another TD run, this time from 15 yards out. Add in a Brandon McManus field goal and the Broncos had a commanding 17-0 lead.
A short time later, the Packers were finally able to put a drive together, capping things off with a 2-yard Eddie Lacy run. At the half, it was 17-7 Broncos.
In the third, Mason Crosby drew the Pack to within a score on a 56-yard field goal. That wouldn’t last long, however, as Denver would extend the lead again on a C.J. Anderson TD scamper from 28 yards out.
During the fourth quarter, McManus would connect again on a 24-yard field goal. Any Packers hopes for a wild comeback were dashed following an Aaron Rodgers sack in the end zone for a safety. That made the final score 29-10
The Broncos proved they’re for real with this win, moving to 7-0 overall. Green Bay falls from the ranks of the unbeaten at 6-1.

The Stars: Peyton Manning got a lot of flak for his age and declining abilities prior to this game, but came out with an efficient 21-of-29 mark for 340 yards. Anderson and Hillman were the stars here, however, with a combined 161 yards and three touchdowns between them. DeMaryius Thomas led the receivers with 168 yards on eight grabs.
The Denver defense showed they’re the real deal with this performance, stifling Green Bay at every turn.

The Goats: This was Rodgers’ worst game as a pro. He threw for just 77 yards on 14-of-22 overall. The run game wasn’t there either: Lacy had just 38 yards on 11 attempts.
Green Bay had just 140 net yards to 500 for Denver, posting 14 first downs to the Broncos’ 24.
If there’s one thing we can nitpick Denver for, it’s penalties. They were flagged 11 times.

Injuries: The Packers have at least a couple of new injury concerns in their secondary. Both Sam Shields and Quinten Rollins suffered shoulder injuries in the first half of the game and had to come out.

Outlook: Looking ahead to Week 9, both teams will be back on the road on Sunday, November 8. The Packers will visit the Panthers (1:00 PM ET on FOX) while the Broncos will travel to meet the Colts (4:25 PM ET on CBS).