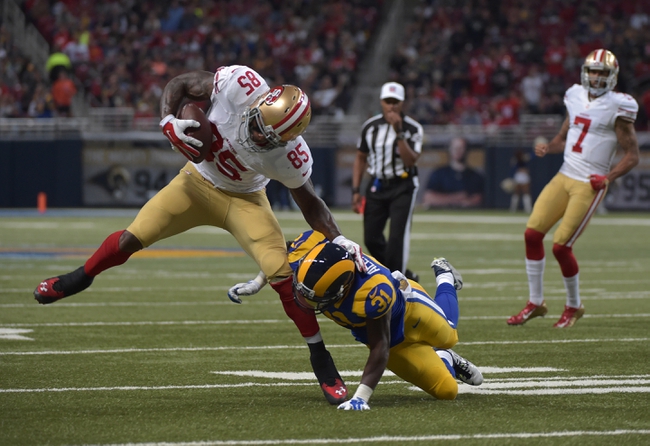 NFL Updates: News From Around the League, Week 9 Schedule and More

Week 8 is officially in the books, and now it’s time for us NFL fans to start looking forward to Week 9--which begins in just a couple of days. That said, let’s check out some of the day’s headlines.

Colts-Panthers Wrap-Up: In a sloppy, rain-soaked evening, the Panthers were finally able to put away the Colts and stay unbeaten following an overtime 29-26 victory. Indianapolis looked finished early on in the fourth, but stormed back with 17 unanswered points to force the extra period. They actually took the lead briefly before a pair of Graham Gano field goals sealed it.
The Panthers move to 7-0 with the victory, while the Colts chalk up another loss in what’s been a brutal season. The good news for them is that their entire division is pretty bad.

Say hello to Vernon Davis, Broncos fans. Denver picked up the 49ers veteran TE and a seventh-round pick in exchange for a pair of sixth-rounders yesterday in a trade.
Davis is a nice pickup for the Broncos, as Owen Daniels just hasn’t been able to bring that same TE magic the team has been lacking this year. Expect Davis to jump right in to a big opportunity.

In a related story, the 49ers will shift Garrett Celek into the starting TE slot now that Davis is gone.
Not that he’ll be able to do much in the Niners’ anemic passing attack, but it’s a nice thought.

The Chargers shared some disappointing news regarding WR Keenan Allen yesterday, saying the star WR would be out of action indefinitely due to a kidney injury.
There’s no timetable on Allen’s comeback just yet, but it doesn’t sound too promising. The Chargers are really banged up with their receivers right now, so watch for Stevie Johnson and Malcom Floyd to step it up on Monday.

The Titans expect QB Marcus Mariota to be able to participate fully in practice tomorrow, and if he does, he should be able to play this Sunday against New Orleans.
Tennessee needs a spark under center, as Zach Mettenberger wasn’t able to do much in these past two games.

The Jets have a few new injury issues coming out of the weekend. First off, there’s Ryan Fitzpatrick, who will reportedly need thumb surgery at some point--for now, it’s a pain tolerance issue and he’s day-to-day.
As for his backup Geno Smith, he’s also day-to-day with a shoulder injury.
Then there’s WR Brandon Marshall. He’s fighting a toe/ankle issue and is possibly in danger of sitting out against Jacksonville. We’ll have to wait and see on that.

NFL Week 9 Schedule: Let’s take a look at the upcoming round of games on the NFL schedule, along with the times and TV networks you can catch them on.