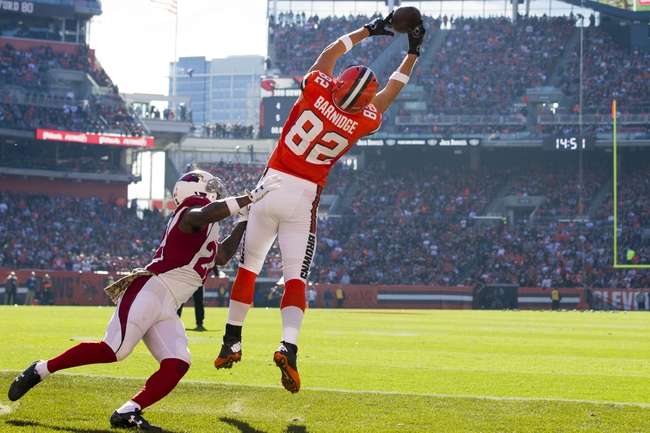 Which Individual Matchups Should You Watch This Weekend?

It’s, rather unbelievably, already Week 9 of the 2015 NFL season. This also, apparently, coincides with red cup season at Starbucks (where I currently sit bringing you this morning’s top ten). You’ll find the top ten individual matchups of the weekend listed below.

Veteran player Barnidge is finally coming into his own this season, with as many touchdown receptions as the Bengals own emerging star Tyler Eifert. Nelson is coming-off a two interception game against the Pittsburgh Steelers and I look for him to be on fire against this major division foe tonight.

Carr, who is averaging 302 passing yards per game, has come into his own this year with the addition of rookie WR Amari Cooper. The Steelers defense (such as it is) is ranked 25th overall. Even with Big Ben Roethlisberger back on the field, I expect them to struggle against an Oakland team that is surging for the first time in years.

Neither of these teams are anything to write home about this year, but I think this will be an interesting matchup to watch. Rivers is still an elite player, but he’s going-up Da Bears 4th ranked pass attack without his top receiver (Keenan Allen will miss the remainder of the year with a kidney injury). This could get ugly, folks, but it’s intriguing nonetheless.

Just take a moment to consider that former first-round bust Blaine Gabbert is once again a starting QB in the NFL. Let that sink in. Then consider that the Niners have also lost their top three running backs to injuries. Things are a little bit of a disaster in NorCal. I look for the Falcons D to absolutely tear-up Jim Tomsula’s team this weekend.

The Jags have been giving-up an average of 21 fantasy points to RBs so far this season. That’s horrible, for those of you who haven’t yet joined the ranks of fantasy football players. Ivory is coming off a 98-yard game and the Jets ought to have themselves a day against a Jacksonville team that looks as dismal as usual, yet is the Colts’ biggest threat in the AFC South.

Crosby has had an excellent (as per usual) season. I look for the Pack to give the Panthers a run for their money, so this could turn into a field goal fest as both teams strive to remain undefeated. Even though I have no doubt that the Panthers will do everything they can to block Crosby, I still look for him to score at least nine (actual, not fantasy) points this weekend.

The Broncos, as you’ve already seen me mention at least 6,000 times this season (that’s an exact count), have a historic defense in 2015. A hurt (but desperate for a win) Luck facing them at home is a combination I can’t wait to watch.

The Saints are coming-off three wins in a row, facing a Titans offense that has looked a mess and is now lacking a head coach (sorry, Whis). Walker has been a slight bright spot, with 97 yards against the Miami Dolphins two weeks ago. I look for him to have a big game on Sunday against a club that is giving-up quite a few points to TEs this year.

The Bucs, for all their issues, are allowing the fewest rushing yards per game in the league right now. The Giants lack an incredible back, so it’ll certainly be interesting to see how the tandem of Rashad Jennings and Shane Vereen look against this club.

The Colts are (as I might’ve already mentioned) absolutely desperate for a win. Their defense is also,   oddly enough, the strength of the team this season. I’m intrigued to see how CJ Anderson and Ronnie Hillman will stack-up against a club that needs a win more than just about anything this weekend.

The pick in this article is the opinion of the writer, not a Sports Chat Place site consensus.
Previous Pick
Bengals vs. Browns - 11/5/15 NFL Pick, Odds, and Prediction
Next Pick
Top Five Best Week 9 NFL Bets